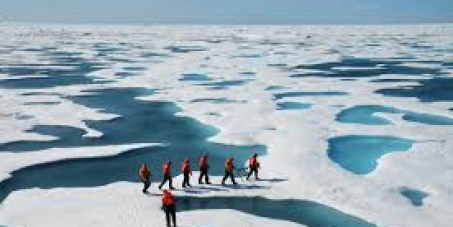 By continuing you agree to receive Avaaz emails. Our Privacy Policy will protect your data and explains how it can be used. You can unsubscribe at any time. If you are under 13 years of age in the USA or under 16 in the rest of the world, please get consent from a parent or guardian before proceeding.
This petition has been created by Matthew and may not represent the views of the Avaaz community.
x

A number of experts on the Arctic have been warning us about the impending loss of the Arctic sea ice at the end of summer. Over the past decade the ice has been falling rapidly in both extent and volume. Within a few years, we are almost certain to see a nearly ice-free ocean in September, and from that point we will move quickly on to years with two, three and four months free of ice.

The sea ice is a vital component of the climate system. Losing it reduces the amount of sunlight reflected back into space, increasing global warming [1], and is understood to affect the behaviour of the Jet Stream causing extended periods of extreme weather, such as has been experienced recently in Northern Europe and the United States. [2]

The warming of the Arctic Ocean seafloor itself will melt frozen deposits of methane hydrates on the seafloor and frozen carbon in permafrost on land. Global atmospheric methane levels have been increasing continuously since 2007, consistent with the low ice cover in the years since then. [3]

Methane is a much more powerful greenhouse gas than carbon dioxide. If levels in the atmosphere soar suddenly, catastrophic climate change is a certainty. A panel of scientists issued a dire warning in 2013 of possible abrupt methane releases: a burst from the seafloor that they think could occur at any time from now on [4]. This would add substantially to global warming, producing even more effect on climate than CO2 from fossil fuels, and could even lead to runaway global warming.

The more the ice retreats, the more the seabed warms in the summer months. Most disturbingly of all, in November 2013 methane levels in many regions of the Arctic spiked at around 33% higher than the global atmospheric average and three times the pre-industrial level [5].

By allowing the sea ice to melt completely and the Arctic to go on thawing, we are clearly letting a runaway situation develop, sooner or later, with terrible implications for our future.

Emergency geoengineering techniques exist that are capable of producing a rapid cooling [6], [7]. One method is to brighten existing clouds above the Arctic by spraying up a very fine mist of seawater. This technique, Marine Cloud Brightening (MCB), has been demonstrated to work by ship exhaust tracks [8]. The job could be done by placing cooling towers on islands on the edge of the Arctic, or deploying ships in the region, and the necessary technology is being developed by engineers in the UK [9],[10].

Both the UK Houses of Parliament [11] and the White House [12] have been about the situation, but it seems that they are banking on the Arcitc melting so that the region can become the next giant oilfield. They have not recognised the huge threat the sea ice loss represents.

Allowing the ice to melt when it can be saved is madness for both human health and the economy- it is estimated that catastrophic climate change resulting from methane release could cost the world $62 Trillion! [12]

The investment required for Arctic cooling is small compared to the reckless investments in risky Arctic oil exploration. It is now common sense that governments fund the research and deployment as soon as possible.