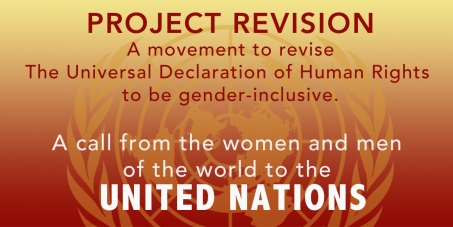 United Nations: Revise The Universal Declaration of Human Rights to be Gender-Inclusive

By continuing you agree to receive Avaaz emails. Our Privacy Policy will protect your data and explains how it can be used. You can unsubscribe at any time. If you are under 13 years of age in the USA or under 16 in the rest of the world, please get consent from a parent or guardian before proceeding.
This petition has been created by Shiloh S. and may not represent the views of the Avaaz community.
x

Sign this petition
Shiloh S.
started this petition to
The United Nations and the People of the World
This is a call of hope designed to inspire the people of The United Nations to revise The Universal Declaration of Human Rights be gender-inclusive language. The Universal Declaration of Human Rights contains words like 'mankind', 'brotherhood', 'he', 'his' and ‘himself’ over 25 times and does not fairly include women and other genders in the language. We choose to no longer be referred to as mankind.

If you are in support of a revision that includes gender inclusive language please sign this petition. We believe that language is indeed a part of how we perceive ourselves, and the those in a continual strugge with basic human rights

The Universal Declaration of Human Rights is one of the most translated and printed documents in the world, and is accepted as a commonly agreed upon document of the human family and continues to be taught in school. The preamble states:

Read it for yourself here: http://www.un.org/en/documents/udhr/

My Story: In 2013 after attending the 57th Session of the Commission on the Status of Women at the United Nations in New York I purchased every copy on hand of The Universal Declaration of Human Rights to proudly bring home to the women and girls in my community. My surprise that this incredible document representing all nations has yet to be updated, sparked this petition, and many conversations with my community about the true implications and impact of women and girls being referred to as ‘brotherhood’. Personally, I felt ashamed to share the Declaration with my community, so disturbed by this blatant disregard for women. I proceeded to share it anyway, and we read it together with gender-inclusivity as an act of solidarity. The most common response women have when I speak to them about the Declaration is that do not feel included or represented. Not feeling included in one of the most important universally accepted documents on human rights is not consistent with the very stated values of the Declaration. While we understand that in years past masculine language was more universally accepted, we now stand that it is time for a revision of this languaging on a global scale, and where better to begin than The Universal Declaration of Human Rights?

In a world in which that war and violence is raging in unprecedented ways, we the undersigned believe that human rights are women’s rights, and the rights of all genders and that justice will be served at a core level by including humankind in the language of The Universal Declaration of Human Rights.

The Equal Rights Ammendment to the United States constitution still wasn't passed in 2020, an almost 100 year struggle. CEDAW, The Convention on the Elimination of all Forms of Discrimination Against Women ( CEDAW ) is an international treaty adopted in 1979 by the United Nations General Assembly. Described as an international bill of rights for women, has been ratified by almost every country, except the United Sates. Amnesty International says: "The United States  is among a small minority of countries that have  not yet ratified CEDAW , including Iran and Sudan. The United States has  the dubious distinction of being the only country in the  Western Hemisphere and the only industrialized democracy that has  not ratified  this treaty."

We need change. We need to begin at the root of the documents that are not gender-inclusive.

Project Revision is a movement to revise The Universal Declaration of Human Rights to be Gender-Inclusive.