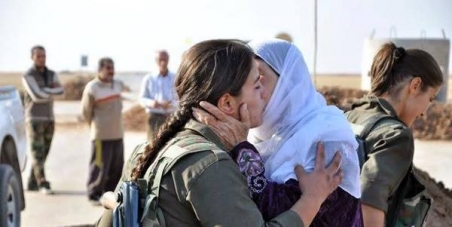 Aid the Kurds of Syria in their defence against ISIS

By continuing you agree to receive Avaaz emails. Our Privacy Policy will protect your data and explains how it can be used. You can unsubscribe at any time. If you are under 13 years of age in the USA or under 16 in the rest of the world, please get consent from a parent or guardian before proceeding.
This petition has been created by Richard P. and may not represent the views of the Avaaz community.
x

Sign this petition
Richard P.
started this petition to
Heads of governments participating in the coalition against ISIS
Right now, brave men and women are risking all to halt ISIS ’ onslaught in the Kurdish region of northern Syria. They are the region’s best hope against tyranny. They face massacre if they lose.

We can help by ensuring our governments provide what they need to defend their homes: defensive and communications equipment, intelligence, food and medicines.

Our governments are nervous of public opinion as they involve themselves in efforts to confront ISIS. While we deplore war, the world has been inspired by the Kurds’ courageous, David-and-Goliath battle to defend the town of Kobane from ISIS terror. And people are demanding: why aren’t we giving them what they need?

We can turn the Kurds’ call for support into a global cry our leaders cannot ignore.

Since 2012, local Kurds have established a beacon of democracy in northern Syria. Women and minorities are represented, and their rights respected. In August, the Kurds bravely fought their way through ISIS territory to rescue thousands of minority Yazidis: now the Kurds face slaughter themselves.

Yet, disgracefully, Turkey is blocking efforts to come to their aid – more worried about their independent-minded Kurdish neighbours than about ISIS tyranny. As a result, the US and its allies have been fighting shy of providing real help – but pressure is building.

Let’s show that we will not accept our leaders standing by while a democratic community is slaughtered for standing up to terror.

Air strikes alone will not save the Syrian Kurds. If we make clear the world stands with them, we can ensure our leaders provide airdrops or a safe corridor over land for reinforcements. Time is running out.

It is time to recognise who our friends are.

UK Foreign Secretary Philip Hammond has observed: ‘“The Kurdish elements within Syria are an important part of the equation in holding the line against [ISIS].”’

We need action to match these words.

Coalition governments have provided weapons to Kurdish forces in Iraq – we must not abandon the Kurds of Syria.