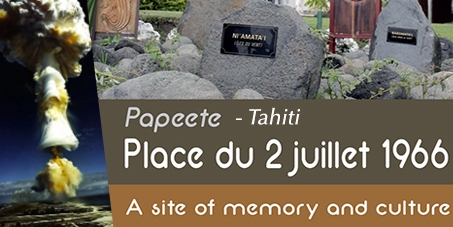 By continuing you agree to receive Avaaz emails. Our Privacy Policy will protect your data and explains how it can be used. You can unsubscribe at any time. If you are under 13 years of age in the USA or under 16 in the rest of the world, please get consent from a parent or guardian before proceeding.
This petition has been created by Moruroa E. and may not represent the views of the Avaaz community.
x

Sign this petition
Moruroa E.
started this petition to
To Mr. Gaston Flosse, president of French Polynesia
Gaston Flosse, the current president of French Polynesia has decided to remove the monument tha was erected in Papeete in memory of victims of nuclear testing. This monument was inaugurated by Mr Oscar Temaru, his predecessor, on July 2, 2006, the 40th French bomb was exploded at Moruroa. Numerous representatives from France, Australia, New Zealand, Fiji, the Netherlands and other countries all over the world were present for the inauguration. This monument, which has been decorated by Polynesian artists, is a sacred place where symbolic stones from Hiroshima, Nagasaki and sites of nuclear tests all over the world have been brought together.

Gaston Flosse wants to erase 30 years of history of French nuclear tests of which he was complicit and has decided instead to dedicate this site to Jacques Chirac, who was criticised all over the world when he ordered a second series of nuclear tests in 1995 after a moratorium that lasted years.

Since 2006, the memory of all victims of nuclear tests around the world has been honoured according to Ma'ohi tradition every 2nd of July, an occasion marked by the presence of important figures from all over the world, including many Hibakusha (survivors of the bombings of Hiroshima and Nagasaki).

To destroy this monument, which is now know all over the world, is a sacrilegious insult to the memories of all victims of nuclear tests and their families.

The Association Moruroa e Tatou that brings together former workers from Moruroa and is associated with NGOs and friends in Polynesia and France launches this appeal to demand that President Gaston Flosse abandon this senseless destruction and that he assure the permanence of this sacred place in memory to the victims of the nuclear tests.

Mr President, we demand that you renounce your decision to destroy the monument of the « Place du 2 julliet 1996 », at Papeete, dedicated to the memory of all victims of nuclear tests, and that you decide to make this a permanent monument.

This petition will be submitted to the authorities of the French Republic and the Secretary General of the United Nations.