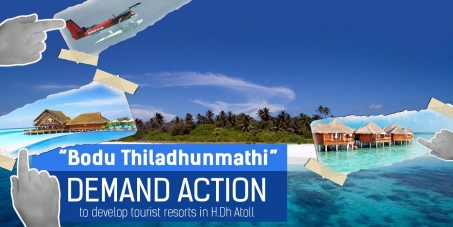 Petition to urge the government to develop tourist resorts in H.Dh Atoll

By continuing you agree to receive Avaaz emails. Our Privacy Policy will protect your data and explains how it can be used. You can unsubscribe at any time. If you are under 13 years of age in the USA or under 16 in the rest of the world, please get consent from a parent or guardian before proceeding.
This petition has been created by Hussain S. and may not represent the views of the Avaaz community.
x

Sign this petition
Hussain S.
started this petition to
To: President of the Maldives Abdulla Yameen Abdul Gayoom

Haa Dhaal Atoll has the highest population compared with the other individual atolls, yet the needs of the people from this atoll have gone unnoticed or perhaps unheard for years by consecutive governments. It is worrying to highlight that residents of Haa Dhaal Atoll earn the lowest income in this country. Similarly, but not surprisingly, people of Haa Dhaal Atoll have the lowest standard of living compared with other regions of Maldives. These factors, combined with lack of employment opportunities available within the atoll have caused mass migration of people to Male' in search of jobs, better education and better healthcare. As a result, the resident population of Haa Dhaal Atoll is decreasing every year causing it harder to compete with other atolls on bringing development projects to many Islands that are in desperate need.

Higher standard of living and earning a decent income while working within the atoll is something we all dream of. The main sector that offer a decent and reliable income for people is Civil Service but this represents a small proportion of our population. At present, we have determined working people in fisheries and agricultural sector. However, their work is generally confined within the atoll as they do not have the necessary mechanism or the incentives to expand their work. In addition to this, inability to move their products between islands and low demand due to low resident population have caused them to settle for an income that barely meets their financial needs. The stagnated state of these activities have led to low income from fisheries and agricultural sector.

The state of our local economy is a great concern for the people of Haa Dhaal Atoll. More importantly, the absence of tourism industry within this atoll has become a major barrier for economic and social development. For instance, in many cases, men are having to work away from home for most of the time, leaving their responsibilities as the head of the family to women who are increasingly being burdened with double responsibilities. This puts a lot of stress on both partners which leads to undesirable family issues. Similarly, young people are another particularly disadvantaged group within our atoll as a result of lack of employment opportunities. Unemployment is one of the main reasons behind the increasing rates of crime among the youth. This dire situation in our atoll is tearing up the social fabric of our society.

It has been over 40 years since the tourism industry flourished in Maldives. However, the atoll with approximately 20,000 people has not yet got the opportunity to enjoy the economic benefits of this sector. In fact, Haa Dhaal Atoll is the only atoll in Maldives that does not have an operational resort. We do understand that three of our islands have been given for resort development but it has been over 12 years without any of them being opened for tourists. This has cost 2,000 jobs that was promised for us with these resorts. Furthermore, some of our uninhabited islands have been leased for agricultural purposes. Sadly, even these agricultural projects have failed in creating enough employment opportunities for residents of this atoll.

We have waited long enough to enjoy the success and development that tourism industry has brought to other regions of the Maldives. We want the people of Haa Dhaal Atoll to have the convenience of working in resorts within this atoll without having to move to other regions.

We believe that development of resorts in our pristine uninhabited islands is the key to improve our income, hence improve our standard of living and to bring the mass migration to halt. This will not only allow us to have an equal participation in tourism industry but also pave the way for further development of this industry. Furthermore, creation of a more vibrant local economy will allow our fishermen and farmers to thrive and expand their work.

History will vouch for the courage of people from “Bodu Thiladhunmathi”. We are proud of our ancestors and we learn from their lessons. We seek courage from their strength and in honor of them, we will stand up in unity to bring the benefits of tourism industry within our reach.

We ask on behalf of everyone of this atoll to sign this petition. The purpose of this petition is to deliver our concerns, hopes and wishes to the government. We hope the petition will make the government aware of the current economic and social situation in Haa Dhaal Atoll. We want to express our interest in being a part of the industry that generate the highest income for this country. We are here to fight for the development of our atoll and In Sha Allah this will become true in the near future!

Today: Hussain S. is counting on you