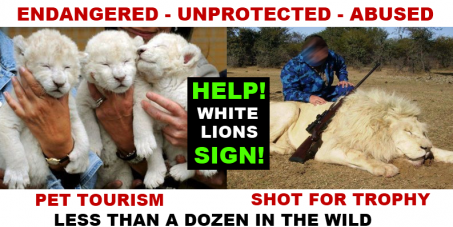 Save the White Lion

By continuing you agree to receive Avaaz emails. Our Privacy Policy will protect your data and explains how it can be used. You can unsubscribe at any time. If you are under 13 years of age in the USA or under 16 in the rest of the world, please get consent from a parent or guardian before proceeding.
This petition has been created by Turner J. and may not represent the views of the Avaaz community.
x

Sign this petition
Turner J.
started this petition to
International governments and all appropriate bodies, including CITES and IUCN Red Data Book

The White Lion is a critically endangered animal, originating from South Africa’s Greater Timbavati region in the heart of the UNESCO Kruger-2-Canyons Biosphere Reserve region. White Lions hold significant conservation and cultural value for the indigenous Tsonga and Sepedi communities of the region and for many cultures across Africa and the world. Carrying a unique genetic marker, the White Lions are a rare phenotype with profound cultural and conservation significance. Today, there are fewer than 12 White Lions in the wilds of their endemic habitat. Despite ongoing forced removals from the K2C biosphere, this genetic rarity continues to occur and is an important part of the biodiversity of this region.

White Lions lack national and international legislative protection and are victims of habitat encroachment, poaching, and human-wildlife conflict. In particular, they are hunted as trophies in captivity through the legal ‘canned’ hunting industry. White Lions are forcibly removed from their natural habitat, sent to zoos and circuses around the globe, dismembered to provide unproven medical benefits, speed-bred in commercial captive breeding operations, and transferred from cub-petting to captive slaughter farms to be shot as tame adults.

Without increased protection, the White Lions of Greater Timbavati face extinction in the near future. We urge CITES, the IUCN and the South African Government to list the White Lion (Panthera leo tsau) as a critically endangered sub-population and increase protection measures of this rare and culturally revered animal.

The WLT is headquartered in the Greater Timbavati region, the endemic habitat of the White Lion and part of the UNESCO Kruger-2-Canyons Biosphere Reserve region. The WLT collaborates with local and international communities to protect these rare iconic animals as global living heritage, of significant conservation and cultural value. The WLT ensures the survival of 3 different free roaming prides in their endemic heartlands. The recent discovery of the genetic marker after 7 years of genetic research reinforces WLT’s campaign to declare White Lions as a protected sub-species or critically endangered sub-population through international regulatory institutions. Visit www.whitelions.org for more information.

Today: Turner J. is counting on you

Turner J. needs your help with "Save the White Lion". Join Turner J. and 24,306 supporters today