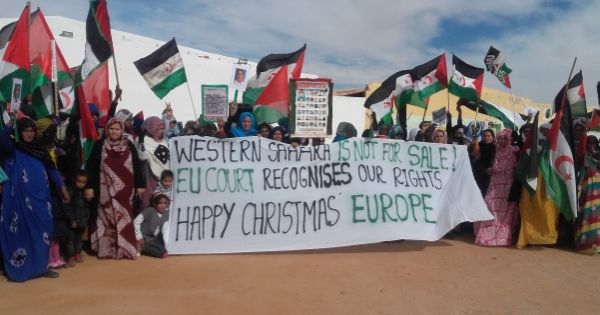 By continuing you agree to receive Avaaz emails. Our Privacy Policy will protect your data and explains how it can be used. You can unsubscribe at any time. If you are under 13 years of age in the USA or under 16 in the rest of the world, please get consent from a parent or guardian before proceeding.
This petition has been created by Sara E. and may not represent the views of the Avaaz community.
x

Sign this petition
Sara E.
started this petition to
We call on the EU to abide by the judgment of its own Supreme Court, and to cease all trade talks regarding Western Sahara with the occupying state, Morocco. As a champion for rule of law and human rights, the EU should respect the rights of the Saharawi people and negotiate trade in goods from Western Sahara with their representatives, the Polisario Front.

More information&colon
The European Commission is negotiating a revised EU&dashMorocco Agreement that would allow the EU to continue importing goods from Western Sahara.

Western Sahara, a territory the size of the United Kingdom, is treated by the UN as an unresolved colonial conflict , stemming from the time that Morocco illegally annexed parts of the former Spanish colony more than 40 years ago. Half the people live as refugees, while Moroccan settlers have outnumbered the local Saharawis. The EU wishes to import Western Sahara products (such as fish and agriculture products) through its trade deal with Morocco.

In December 2016, the Court of Justice of the European Union (CJEU) ruled that no EU trade or association deal with Morocco can be applied to Western Sahara , as it is a “distinct and separate territory” from Morocco, unless with the express consent of “the people of Western Sahara”.

However, it would appear that the EU Commission is seeking to circumvent the ruling of the CJEU by&colon
1) negotiating exclusively with Morocco and ignoring the exclusive, legitimate and UN&dashrecognized representative of the people of Western Sahara, the Polisario Front;
2) confusing the “people” of Western Sahara with the “population” of Western Sahara, i.e. a majority of Moroccan settlers and the few remaining Saharawis that haven’t been forced to flee to exile;
3) seeking some Moroccan institution or body to provide the consent of the “population”.

If so, the EU’s response to the landmark ruling of the CJEU on Western Sahara would fail to uphold the fundamental rights of the Saharawi people, undermine the EU’s credibility as a law&dashabiding regional block and create legal uncertainty for European businesses.

We believe that the rights and the future of the Saharawi people and the fundamental tenets of the European legal order, which concern all Europeans, cannot be brushed aside merely for the geopolitical and commercial interests of a few .

The EU needs to respect EU and international law , and abide by the judgment of the EU Court of Justice. Morocco has no mandate to negotiate with the EU on behalf of the people of Western Sahara.

Together, we can send the EU a strong signal that the days of trade over people are finished. Sign up&excl

Today: Sara E. is counting on you