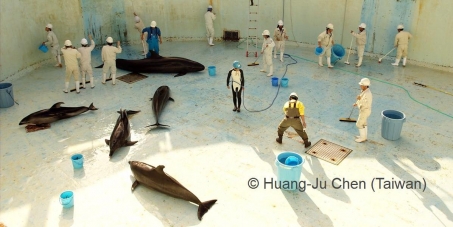 To stop dolphins and whales captivity in japan. no more captives. Set the captives free.

http://www.telegraph.co.uk/news/worldnews/asia/japan/10359981/Japanese-dolphin-killing-town-in-The-Cove-to-open-marine-park.html
Getting worse and worse....
Their greed of dolphin use as " resources " does not stop.
They express a dolphin as "marine resources" frequently.
A slaughter, dealing, a slave,,,,,, anything they want .
Strategy (oppose to a boycott ) of organizations of is spread to people as Stereotype.
Wakayama whaling industry is sly and skillful more than oversea organizations think.

Please help.
http://www.indybay.org/newsitems/2013/07/20/18740105.php
http://oceansspirit.wordpress.com/2013/10/06/toshio-yashiros-non-profit-individual-tokyo-plea-for-saving-dolphins-before-slaughtering-in-japan/
The Petitions of Boycott " World Heritage in japan " for saving whale and dolphin.
"My boycott theory " is "Negotiation between Wakayama Prefecture ( kumano,taiji )and the world ".
Continuation of slaughter ? or Tourists from overseas ?

[ "The Huffington Post" publishes a whale and a dolphin issue frequently. Like other Japanese media, "The Huffington Post Japan" is not fair at all. This report is not published at the Japanese edition for the Japanese who has to take into consideration. Although this is the act in Japan, this report is not published by a Japanese edition why?
Japanese people has been deprived of the opportunity to take a whale issue into consideration by such manipulation of information.
Truth has always been concealed to the Japanese who has to consider this slaughter truly.
The overseas protection organization has pointed out this manipulation of information for long time.
If it is an intention of the Japanese government, it has succeeded until now. However, it is different after this.
Please cooperate in "The coastal whaling area boycott".
please read more.
https://www.indybay.org/newsitems/2013/09/01/18742507.php

The Huffington Post Japan (in association with The Asahi Newspaper)

"momo" poped out of the pool. She is ok.

The season of a foolish slaughter starts in Taiji again. again and again...How long do we have to wait for the end of slaughter of this non-human people? They must have each individual character. The news by which they are killed is very intolerable. I am ashamed of this continuation of an act as one of Japanese. What should I do? Wakayama Prefecture never stopped slaughter.

The time has come ,my instinct says. Campaign has to be stage of a boycott. a boycott ? what ? Japan cares about the cultural connection of an overseas very much. Because japan is an island country. World heritage is an important connection of an overseas for each prefecture.
Please cooperate in the boycott of "kumano" which Wakayama Prefecture shares with other two prefectures. Thank you.

"Whales and dolphins are kept healthy in Japanese aquariums, as they receive great care from trainers and veterinarians."

"sarah" died pops out of the pool.

"The fishery has thus contributed to" the welfare" of people in countries where whales and dolphins are kept in aquariums."

The magic word of "welfare" is used for one of the political styles of Japan.This magic word is the method of advertizing that " I am a good person. " Hiding in the reverse side of this word, They are hypocrites.
Truth? Don't tell ,don't ask.

The readers of this newspaper ( japan times ) are English-speaking countries. There is no same report in a Japanese general newspaper."The japan media have freedom which media do not report" . people were surprised in nuclear power plant disaster. I am sure that " whales issue "is also one of them.Japan media are only mere amusement and international justice does not exist there.

＊Truth of a dolphin show. Set the captives free.
This photograph that is hard to believe was taken by the Taiwan photographer Huang-Ju Chen.
http://www.nhm.ac.uk/visit-us/whats-on/temporary-exhibitions/wpy/photo.do?photo=2823&category=13&group=3
©Huang-Ju Chen (Taiwan) "The dolphin show " / Natural History Museum

This is one of the precious proof the ability of man is not able to keep a dolphins and whales rightly.
On the reverse side of the gay dolphin show, the dolphin which cannot appeal against the present condition has suffered abuse.

There are no animal welfare laws in japan for dolphins and whales in captivity.
A family is killed cruelly and they are caught.
They are caught for a dolphin show and the dolphins which were not selected were killed.
This unjust repetition is continued for many years for many years.
so sad!
I presented this photograph and asked other cleaning methods to WAZA
My question was disregarded. All the organizations also ignored my question.
This goes on in USA, in Europe, and everywhere else dolphins are held in tanks."
Other cleaning methods do not exist.
dolphins are lying on the bare floor of an aquarium tank in Japan while workers clean grime and goop off the walls.
* A certain prominent specialist says that the same cleaning method goes on at all of the 51 dolphin abusement parks in Japan.
Many whales and dolphin specialists have appealed against this cruelty.

;Sigeyuki Yamaoto Chairman/JAZA
info@toyama-familypark.jp
kazutoshi arai Director /JAZA
kazutoshi_arai@granvista.co.jp
;JAZA （Japanese Association of Zoos and Aquariums）
http://www.jaza.jp/english.html
kanako@jaza.jp
This organization is an organization which received public-benefit authorization in the Prime Minister.
;WAZA (World Association of Zoos and Aquariums)
http://www.waza.org/en/site/home
secretariat@waza.org.
;Ministry of Education, Culture, Sports, Science and Technology ( MEXT)
http://www.mext.go.jp/english/
voice@bunka.go.jp
;Biodiversity Center of Japan
http://www.biodic.go.jp/index_e.html
webmaster@biodic.go.jp
;Nobuteru Ishihara (Minister of the Environment)
http://www.nobuteru.or.jp/english/index.html
nobuteru@nobuteru.or.jp
;Ministry of the Environment Government of Japan
;Ministry of Environment natural environment office
http://www.env.go.jp/en/
shizen-some@env.go.jp
_____________________________________________________
This is a slave act to other species which man is performing for money. Let's make the industry realized by this human being's ego finish.
Many cities in the world are thinking over on humane grounds about dolphins and whales captivity. Now, Captive Facilities are closed by big efforts of many specialists at many areas in the world.
"India bans captive dolphin shows, says they should be considered ‘non-human’ people".
We have to terminate this history of blood.
Please sign the petititon to stop dolphins and whales captivity in japan,and set them free.
please take action. Please share this with your friends.
Please make this spread.

(Many specialists are explaining details for a dolphin. In order to help dolphins, please refer to explanation of the specialist who is working hard. I offer the greatest gratitude to them. )
The Japanese government ignores the big contrary from the world and they are moving in order to nationalize the whaling industry.
I am thankful from the bottom of my heart to "the anti-whaling country, ngo, npo,overseas media and Journalist, specialist, and individual" who are doing hard work for ending of japanese whaling.
love you.