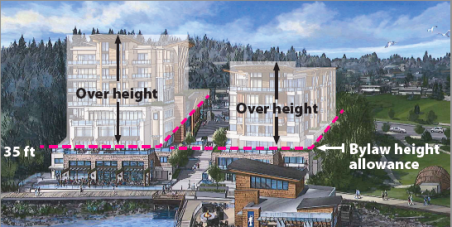 Town of Gibsons Mayor and Council: Save Gibsons Waterfront!

By continuing you agree to receive Avaaz emails. Our Privacy Policy will protect your data and explains how it can be used. You can unsubscribe at any time. If you are under 13 years of age in the USA or under 16 in the rest of the world, please get consent from a parent or guardian before proceeding.
This petition has been created by Suzanne . and may not represent the views of the Avaaz community.
x

The quaint seaside village of Gibsons, home of the long-running Beachcombers TV series, is being threatened by a mega-development project called the George Hotel that would destroy the character of the town, threaten our drinking water aquifer, spread toxic contaminants in our harbour, and end up a liability to citizens.

Gibsons Landing is a small, scenic seaside village on the southwestern Pacific coast of British Columbia, Canada. Intense development pressure has been building to develop waterfront lands here for some time and has finally come to a head, pitting local citizens against a hotel developer.

The proposed hotel and condominium complex, right on the waterfront, is TOO BIG.

At 125 ft (38 metres) tall, it would be over THREE TIMES the maximum allowed height of 35 ft. (10.6 metres), and it would be the largest building in the entire region of the Sunshine Coast. If approved, it would create a precedent for future development in Gibson’s Landing, with other developers able to apply for more over-height buildings, essentially creating looming towers along the waterfront of our picturesque village.

The project is TOO RISKY.

Excavating the parking garage is likely to breach the Gibsons Aquifer, risking catastrophic blowout and contamination (loss) of our drinking water—awarded best water in the world in 2005. In addition, dredging for the proposed marina beside existing fuelling (part of a 60-year-old industrial marine ways) risks releasing toxic pollutants into our harbour.

The Harbour Area Plan (HAP) planning process was undertaken to resolve community conflicts over ‘how big’ and ‘how much’ development should occur over time in the Gibsons Harbour Area, and protect Gibsons Landing from overdevelopment. Through this democratic public planning process, the citizens of Gibsons collaboratively agreed on the size, scale, character, and density of future development in the Harbour Area. In 2012 the currently elected council unanimously adopted the HAP. The plan was then incorporated into the Gibsons OCP Bylaw 985, and subsequent zoning bylaws were written to implement the HAP.

Implications for all of British Columbia and Canada.

We want jobs and development, but the rules, which embody community values, must be respected.If the Town of Gibsons can ignore their official Community Plan By-Law under pressure from a developer, a dangerous legal precedent will be set throughout British Columbia and the rest of Canada. If the rules are broken in Gibsons, they can be broken everywhere!

Honour the Town of Gibsons Official Community Plan (OCP) ByLaw 985-12/2012 and zoning bylaw 1065, including and especially by not permitting any building in the Harbour Area to be taller than the current 10m/35ft height limit.

Guarantee Gibsons Aquifer will not be placed at risk by development.

Safeguard Gibsons Harbour from the spread of toxic contamination.

Protect residents of the Town from any and all tax burden as a result of the George hotel and condominium project.

Today: Suzanne . is counting on you

Suzanne . needs your help with "Town of Gibsons Mayor and Council: Save Gibsons Waterfront!". Join Suzanne . and 1,615 supporters today