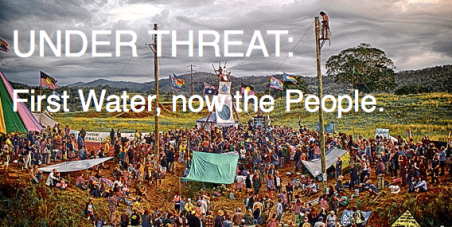 By continuing you agree to receive Avaaz emails. Our Privacy Policy will protect your data and explains how it can be used. You can unsubscribe at any time. If you are under 13 years of age in the USA or under 16 in the rest of the world, please get consent from a parent or guardian before proceeding.
This petition has been created by Australian P. and may not represent the views of the Avaaz community.
x

WATER IS LIFE AND WE ARE PROTECTING IT! NOW WE ARE UNDER THREAT BY OUR OWN GOVERNMENT!!!!

The Australian Government is taking up arms against its own civilians in the Northern Rivers Region peacefully defending their land and water and human rights. A national snatch and grab of Australia's remaining natural resources is at play by corporations licensed by state and federal governments. Sacred and World Heritage sites such Uluru, the Tasmanian Wilderness, and the Great Barrier Reef along with epic proportions of ground water and agricultural land are now under threat from mining and logging on unprecedented scale.

Local police who DO NOT want to take up arms are being ordered to act against their own community. Officials are being sacked and replaced to ensure corporate agenda is enforced against the 87% will of the people. Under the Nuremberg Principles officers can conscientiously object to orders that violate human rights or that are unlawful.


The current situation is NOW ESCALATING with a massive social movement emerging in Australia, especially against FRACKING which is destroying our Country. The State of NSW has ordered a military police action against Australian civilians at a non-violent action at #Bentleyblockade likely to occur on the 19th May 2014 in response to thousands of concerned residents peacefully protecting their ground water from potential contamination by corporate mining activities. The latest acts of ecocide are on the back of 200+ years of genocide of the Original Custodians, theft of their natural resources, their traditional way of life and their children (ref: The Stolen Generation 1909 to 1969, The NT Intervention 2007 onwards). The Australian Government has a consistent history of violation of Human Rights. Consequently the systematic destruction of ecosystems since colonization is now affecting all residents of Australia.

The current situation is highlighting the Government's consistent breach of the Declaration of Human Rights. It is NOT protecting its own civilians and their right to peaceful protest in their duty of care for their land, water and protection of future livelihoods. The current government is stripping World Heritage sites from protection lists, asserting austerity over the people and licensing large scale logging and mining activities causing wide-spread ecocide. The people of Australia have a right to determine how their communities and bioregions are developed while protecting their natural resources and biodiversity. For example, 87% of the local Northern Rivers NSW community voted against the proposed mining activities, yet substantial tax-payer funds have been allocated for military action against the people to send in a 700 strong riot police squad to ensure the opposed mining activity proceeds. Thousands of men and women have had no choice but to take non-violent direct action by camping at the threatened site to protect their groundwater and appeal for political intervention. The State and Federal Governments are ignoring the majority will of the people, and now ordering martial law in favor of an unwelcome industry asserting its destruction upon the community without social license.

THE GOVERNMENT IS A PUBLIC SERVICE FUNDED BY THE PEOPLE OF THIS COUNTRY AND SHOULD BE ACTING IN THE INTEREST OF THE PEOPLE.

Concerned residents of the Northern Rivers, including many Traditional Custodians, appeal to the United Nations Security Council and the international community on behalf of all concerned Australians, for immediate intervention to protect the people from harm and support their right to peaceful protest as they uphold their duty of care to protect the land, the water their human rights and all cases to come.


The Official Statement of the Australian Government as a United Nations Security Council Member is below and contravenes its current violent order against its own Australian civilians. :

“Australia believes that protection of civilians is central to the promotion of peace and security. Drawing on our record of practical contributions to strengthen peacekeeping, Australia will work to ensure the Council provides peacekeepers with the mandate, training and guidance they need to protect civilians.”

Drawing on our experience in integrated approaches to conflict prevention in the Asia Pacific, Australia will promote enhanced use of preventive tools at the Council’s disposal, including greater cooperation between and support for the efforts of local, regional, and international actors. Australia recognises the importance of supporting local approaches to preventing violent conflict with appropriate international responses. Australia’s work on the Council will focus on addressing the drivers of conflict by better aligning security and development efforts towards strengthening institutions that promoting peace and security.

Regional and sub-regional organisations: Australia understands the vital role that regional and sub-regional organisations have to play in addressing peace and security issues. Australia’s record of leadership of regional peace missions means we are committed to ensuring the Council cooperates closely with regional bodies and encourages their participation in Council deliberations.
Transparency: A long-standing advocate for Security Council reform, Australia believes that greater transparency will enhance the credibility of the Council’s work. We will offer a voice for the small and medium countries of the world. Australia is deeply committed to ensuring the views, experiences and lessons of the broader UN membership are heard by the Council.

Today: Australian P. is counting on you