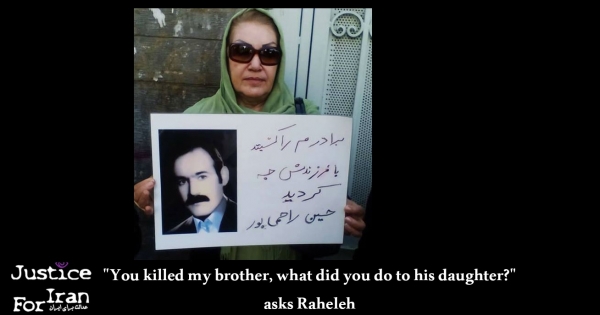 Where is baby Golrou? Help the aunt to find her

By continuing you agree to receive Avaaz emails. Our Privacy Policy will protect your data and explains how it can be used. You can unsubscribe at any time. If you are under 13 years of age in the USA or under 16 in the rest of the world, please get consent from a parent or guardian before proceeding.
This petition has been created by Justice F. and may not represent the views of the Avaaz community.
x

Sign this petition
Justice F.
started this petition to
UN, Iranian Judiciary, Ministry of Foreign Affairs: Islamic Republic of Iran
From a detained mother and father, Baby Golrou Rahemipour was born in prison in March 1984. Baby Golrou’s political activist mother who was pregnant at the time of her arrest was imprisoned along with her husband who was also a political activist in Iran. The prison officials took Golrou from her mother in April 1984, when she was only 15 days old. Since then no one has had any news about the baby. According to the Evin prison officials Golrou’s father is said to have been executed a few months later.

Baby Golrou’s aunt, Raheleh, has been trying for many years to uncover the truth about her missing niece. She has participated in many direct actions demanding justice for her brother and niece. Yet all attempts have been to no avail and she has been threatened with arrest by the Iranian security forces.

For over three decades, the Iranian government has refused to provide any information about Golrou’s fate or whereabouts.

Help Raheleh to find Golrou who if alive, is now a woman in her thirties.

Please sign the petition demanding the UN Working Group on Enforced and Involuntary Disappearances to fully and impartially investigate Golrou’s case and make Iran comply with its obligations.

Please in addition to signing the petition also email this petition to the Iranian Judiciary and Foreign Ministry of Iran and ask them to fully and impartially investigate this case.

Here are their emails:


To read more please go to Justice for Iran's website: