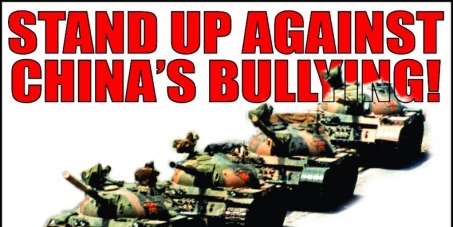 STOP CHINA'S ILLEGAL OCCUPATION ON THE THE PHILIPPINES, VIETNAM, INDIA, TIBET, and JAPAN

By continuing you agree to receive Avaaz emails. Our Privacy Policy will protect your data and explains how it can be used. You can unsubscribe at any time. If you are under 13 years of age in the USA or under 16 in the rest of the world, please get consent from a parent or guardian before proceeding.
This petition has been created by Maria D. and may not represent the views of the Avaaz community.
x

Sign this petition
Maria D.
started this petition to
United Nations, Asian country leaders, the people of Asia, everyone
Throughout human history, war and violence defined whether territorial boundaries would expand or constrict.

The rule of law seldom became the standard of societal life; too often, it was might over right.

But evolution and the refinement of human morals and ethics have moved mankind, from the mid-20th century, to rise above the pattern of war and violence towards the higher invitation of sustainable peace and the rule of law.

For that purpose, the United Nations was established.

As an ordinary citizen of the world, but a concerned one, it is beyond my present knowledge and understanding how the United Nations intervenes in situations that precisely lead to serious violations of the rights of people and nations.

I just know of several small nations of particular interest to me, are severely challenged by the bullying of a much larger and stronger nation.

I refer to the Philippines, Vietnam, Tibet, Japan, Korea, India which are now being pushed around by China.

It may be that the procedural and legal requirements for active United Nations intervention have yet to be satisfied. I can only hope that, indeed, there is an ongoing and urgent process in the United Nations today to save Asia from being cut up and swallowed by a giant nation unable to restrain its greed and arrogance.

Meanwhile, not knowing when, if ever, the United Nations can effectively intervene, I cannot wait to see the physical attempts to dismember the Philippines, Japan, Korea, Tibet, India and Vietnam, as China uses its superior military force to threaten innocent countries which simply wants to protect its territorial integrity.

I must be able to act, as so all other citizens of the world/ who choose justice over force, who choose peace over war, who choose respect over arrogance.

This movement is only confined within the territorial disputes
between China and other Asian countries, and this has nothing
to do with anti terrorism or religious issues. All we want is to
have UN intervene and use its power to stop China from its illegal
occupation on Scarborough Shoal in the Philippines, Senkanku Island
in Japan, Paracel Island in Vietnam and Aksai Chin in India.
Finally, end the decades of stand off among most Asian nations.

Today: Maria D. is counting on you