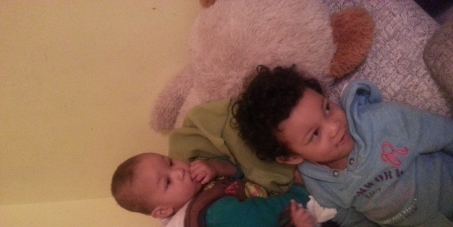 By continuing you agree to receive Avaaz emails. Our Privacy Policy will protect your data and explains how it can be used. You can unsubscribe at any time. If you are under 13 years of age in the USA or under 16 in the rest of the world, please get consent from a parent or guardian before proceeding.
This petition has been created by Seye O. and may not represent the views of the Avaaz community.
x

MY BROTHER IS INNOCENT

My name is Olu a Nigerian resident in Beijing China. My brother had been sentenced by the Chinese people local court to 10years in prison for an alleged robbery case he knows nothing about. There is every indication to proof his innocence but the court has refused to grant all his proof

He was arrested and detained on the 25th of October 2012 before he was sentenced this year November 7th 2013. His lawyer has made an appeal on his behalf which the court has accepted but due to the Chinese law I don’t think the appeal would make any change if proper measure is not taken.

The Nigerian embassy is aware of this incident but they have refused to show any interest. They even declined the invitation extended to them by the court on two instances during the sittings. I believe their presence at the court would have made a very good impact but am yet to understand why they never showed up. While I was even at the embassy after the court judgment to complain why they were not present at the court the Deputy Chief of Mission had to threaten me with the police because he felt I was not in a position to question their authority. Since then I have been restricted from the embassy.

His lawyers have really tried to proof his innocence but with regards to the Chinese judiciary law they have limited power to defend their clients especially when the prosecutor has submitted their final verdict to the court.

The Chinese judiciary system is one I respect very much because of their very good records of operating a fair and responsible judgment but on this case there is a high degree of misconception from the prosecutor due to the high degree of conspiracy of the complaints.

I know I don’t have the final say or authority to proof my brother innocence except the court and that is why I am calling on fellow Nigerians and whom it may concern to help call on The Federal Government to call the attention of the Nigerian Embassy in Beijing to help me follow up the case at the appeal court so that the court can make sure my brother is proven innocent and released and if he has been found guilty of this allegation which I largely doubt they should be able to give substantial evidence(s).

There is no doubt that their several Nigerians who are involved in various criminal activities in China but at the same time there several Nigerians whom have established their selves very well and positively in their various fields in China. The police and the court all over the world are human being, no matter how diligent their system might be they sometimes make error in their assessment and judgment. The negligence and uncared attitude of our embassy when some of us are found in situations like this has made several innocent Nigerians to be languishing in the Chinese jail. They are the only one that can rescue Nigerians in situation like this by defending our human rights. I am not saying they should support those Nigerians who are really involved in criminal activities because no upright country would defend her nationals who come to another country to dent the image of the country by involving in criminal activities but they owe it a duty to protect our nationals anywhere and time their rights were infringed upon.

Chinese are very accommodating people but sometimes they treat foreigners according to the way their country treats their own nationals. The Chinese are not the ones making us to live under pressure in China but our own authorities.

Please I am calling on the whole Nigerians and concerned to help me add their voice(s) so that the Nigerian government can call the attention of the Nigerian embassy in Beijing to show interest in my brother case. I know they don’t have the authority to tell the Chinese government to just release my brother all I want is for them to help him in defending his human right and make sure they give him the right judgment.

The most pathetic is that his wife was also sentenced with him and right now there is no one to take care of their two babies (Aged 3years and the other 1year old). He is Type 2 diabetic and I learnt he complains of inadequate medical attention at the detention. I don’t want my brother’s case to be like the Florida man James Bain who was found innocent after spending 35 years in prison or like the reported case of Yu Yinsheng in China who was found innocent after spending 17 years in jail on the alleged of his wife murder.

I still believe in the system of the Chinese judiciary system and that is why we have made appeal to the Supreme Court that if the court thoroughly look into this case with the interest of the Nigeria embassy in Beijing the court would finally make the right judgment.

GOD BLESS THE INNOCENT AND LOVING PEOPLE OF NIGERIA

Today: Seye O. is counting on you

Seye O. needs your help with "URGENT ATTENTION OF THE FEDERAL GOVERNMENT & NIGERIA EMBASSY BEIJING TO INTERVENE IN MY BROTHER'S JAIL SENTENCE IN CHINA". Join Seye O. and 528 supporters today