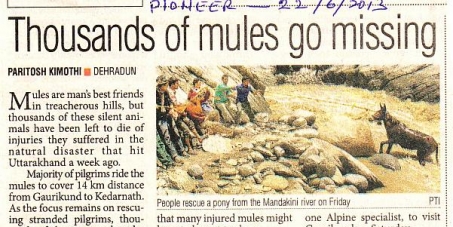 URGENT! to get Administration permission to save thousands of animals after flood in Uttarakhand

By continuing you agree to receive Avaaz emails. Our Privacy Policy will protect your data and explains how it can be used. You can unsubscribe at any time.
This petition has been created by Kasia D. and may not represent the views of the Avaaz community.

Sign this petition
Kasia D.
started this petition to
Shri Vijay Bahuguna,4 Subash Road, C.M.Office, Dehradun,
Shri Aziz Qureshi, Governor of Uttarakhand, Rajbhawan Dehradun,248003 INDIA,
Mr Subash Kumar, Chief secretary of Uttarakhand, phone 9917451030 , cs-uttaranchal@nic.in
Organization People for Animals do their best to save thousands of animals who stuck in the buried gorges. Over that there are people also who don't want to leave their animals in need!! Special helicopter is absolutely necessary to save them but they DO NOT get permission for use it from goverment ! Only one little sign can save so many lives!!

As PFA says on their FB:
"Acccording to latest updates, around 4000 horses and mules are still stranded in the treacherous heights above kedarnnath and Hemkund, It has been confirmed by the people out there that the horses and mules are starving. The secretary of the government has not considered the air dropping of animals, as they are not finding it so important, Government is not willing to consider 1 sortie to deliver one drop, no request is done by the army to deliver fodder for these animals, around 40 bags of fodder is still lying in Joshimath since past 2 days which is yet to be traveled to Guptkashi, but as there are awaiting instructions from the secretary everything is on halt, according to the local people there the animals have almost lost there patience and control and have become restless, they are attacking people for food, the situation is quite sensitive, if in 24 hours no step is taken by the government, these animals would fall weak and collapse, and if they collapse and die, then the government would likely send one helicopter to bring one horse down to bury, because if they tend to leave all dead mules the situation would be hazardous as there would be danger of many life threatening diseases like cholera etc, then why not now? ?There is no diesel left in vehicles in which fodder was being travelled for these horses. We have also requested the secretary to ask Mr Dilip Jawalakr the DM of Rudrprayag to organize a combine team of army men and the local horsemen to chalk a narrow mule track, to enable the villagers to climb up to kedarnath and other areas nearby and bring them down., It has been also reported that they are building a trolley in which one bag at a time will be travelled to Joshimath, where it will wait till the further instructions come.
If one helicopter is just made available to just air drop the fodder, many lives can be saved, but the government is just not willing to listen, Its high time that some urgent action should be taken because it’s a matter of 4000 mules and horses life. It has also been reported that around 11 families(male) are stuck with there horses and mules, they are not leaving the place as they don't want to leave there animals behind, but soon they would die in vein if no food is available for there animals."
Report this as inappropriate
There was an error when submitting your files and/or report.
Inaccurate Inappropriate language Hate speech Illegal Commercial/spam Offensive
×

Today: Kasia D. is counting on you

Kasia D. needs your help with "URGENT! to get Administration permission to save thousands of animals after flood in Uttarakhand". Join Kasia D. and 2337 supporters today