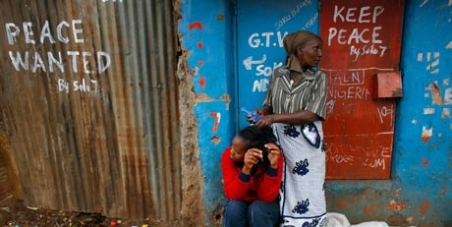 This petition is closed
50 Supporters
Stephanie C.
started this petition to
Citizens of Kenya
On March 4, 2013, Kenyan citizens will go to the polls to vote.

In the 2007-08 election Kenya erupted in the worst violence the country had experienced in decades. It shocked Kenyans and the world. Over 1,500 were killed, and up to 600,000 were displaced.

But, it doesn't have to be this way - election violence is not inevitable.

In fact, in the past, Kenyans have shown they have the capacity to unite, transcend their differences and vote peacefully. In 2010, they did just that. Just two years after the 2007-08 post-election violence, when wounds were still raw, Kenyans went to the polls again to vote in a new constitution. There was no violence. Not one person was killed. Kenyans chose peace.

It is up to ordinary Kenyans to choose peace again. Let us show Kenyans that people across the world support them in rejecting intimidation and violence. Let Kenyans know that we support them in coming together to continue building their great country.

Sign the urgent petition calling on all Kenyan citizens to respect the rule of law and VOTE IN PEACE and then forward this to everyone -- when we hit 50,000 signers we'll take our unprecedented global call to the local media in Kenya who will let all Kenyans know that the world is supporting them to vote peacefully.

President Barack Obama has urged Kenyans to vote in peace too. He delivered a personal message to the people of Kenya, where his father was born, urging them to “reject intimidation and violence and allow a free and fair vote.” Watch the video on YouTube.

Statement of Support:
“ The March 2013 elections should bring Kenyans together in a celebration of diversity. The elections will be an opportunity for Kenyans to own their peace and take a huge step towards decentralizing power and devolving resources to the newly created counties. Kenya needs friends to do this. It is said that if you want to walk fast, walk alone. If you want to walk far, walk with friends. Let us walk far, friends of Kenya. "
Alice Nderitu, Kenya.
Woman PeaceMaker 2012, Joan B Kroc Institute for Peace & Justice