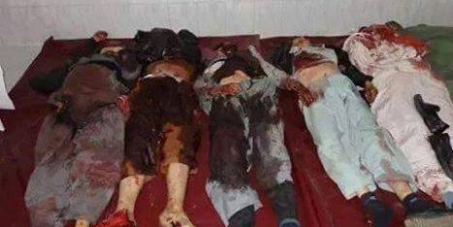 By continuing you agree to receive Avaaz emails. Our Privacy Policy will protect your data and explains how it can be used. You can unsubscribe at any time. If you are under 13 years of age in the USA or under 16 in the rest of the world, please get consent from a parent or guardian before proceeding.
This petition has been created by Zeinab Z. and may not represent the views of the Avaaz community.
x

Sign this petition
Zeinab Z.
started this petition to
U.S.A, Europe, Asia Authorities & their people
Being Hazara and Shia is not a crime. each individual has the rights to live and no one has the right to take it, no matter what religion, ethnicity, tribe, face, color and nationality they have. this is vividly clear that ethnicity, tribe, face, color and nationality are beyond our decision. yet it has been several decades that Hazara people are prosecuted inside their homeland-Afghanistan and neighbors such as Pakistan and Iran only because they are Afghan, Hazara and Shia. Hazaras are peaceful, friendly people who are civil activists and eager to bring changes in good. they are always willing to pursue their goals through education in order to be useful in society. regretfully the Hazara Afghans have always been targeted by other tribes and nationalities inside Afghanistan, Pakistan and Iran only because they are Afghan, Hazara and Shia. instance: 62% of them were killed in 1890s, by king Abdulrahman. thousands were murdered in 1992 at Kabul Afshar, thousands in Mazarisharif in 1998, hundreds in Bamyan and Yakawalang 1998-2000. tens after coalition invasion (2001-2015)
http://www.hazara.net/2012/09/hazara-slavery/
http://www.hazara.net/persecution/mazar.html
http://www.rawa.org/mazar6.htm
and just recently 51 Hazara people have been kidnapped in Afghanistan, 15 killed on the road, 2 Hazara child has been raped in Iran and they always being targeted by suicide attackers in Pakistan - Quita.
http://www.bbc.com/news/world-asia-31600476
http://www.bbc.com/news/world-asia-28481282
Hazara people has the absolute and equal rights to live as other people in this planet and not being killed only because of their look, tribe, ethnicity and nationality!
http://www.kabulpress.org/my/spip.php?article227696
http://www.kabulpress.org/my/spip.php?article228742
we as humans should not watch and sit Apathetically! this is a must duty for us, specially the International Communities such as UN agencies to take inhumanity issues very seriously and take actions urgently to save innocent people.