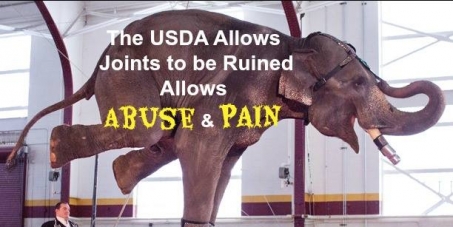 By continuing you agree to receive Avaaz emails. Our Privacy Policy will protect your data and explains how it can be used. You can unsubscribe at any time. If you are under 13 years of age in the USA or under 16 in the rest of the world, please get consent from a parent or guardian before proceeding.
This petition has been created by Save A. and may not represent the views of the Avaaz community.
x

Large mammals do not belong in cramped tanks, confined zoos, or chained in circus rail cars. Nor should puppies be "milled." This should be End of Story. But as the exposés, Blackfish and An Apology to Elephants reveal, the agency charged with enforcing the Animal Welfare Act (AWA), the USDA, is not doing its job. Neither has Congress kept the continued suffering of captive animals in its oversight. THERE NEED TO BE CONGRESSIONAL HEARINGS.


The exploitation of animals in the US is perpetrated by the USDA, and the AZA (Asso. of Zoos & Aquariums). Both work secretly together and both falsely claim to be protecting animals. If there is ever to be better conditions for animals, it starts with the USDA being exposed for the USDA's lack of enforcement of the AWA for circus, zoo & aquarium animals. If there are to ever be better conditions,the AZA needs to be exposed for the animal broker it is, meaning slave trader. Ultimately it goes back to the USDA which approves all the animals' moves and living conditions, most beyond tolerable. Perhaps the most egregious of AZA actions is allowing zoos to breed animals so that there are cute babies and then to murder them under the guise of "euthanasia." For decades the public has believed the zoos were doing this out of kindness, but the motive is money due to lack of space. ALL AZA zoos do this.

What can be done? The US Congress needs to investigate, it pays the USDA's budget. USDA/Animal Care inspectors retire and then go to work for Ringling or the AZA. They hardly "rock the boat" during their tenure with the USDA since the inspectors do not want to alienate potential employers. The good of the animals is left out of the equation. It's the same old equation that makes the animal exploitation industry go-round - big $$$Because elephants and orcas are are coveted money-makers, the AZA falsely claims breeding programs (Species Specific Programs) are for conservation when not one animal is brought back to the wild to replenish their species. More large mammals are doomed to a life of imprisonment where they cannot live the lives they are genetically programmed to live. They are miserable and in both psychological and physical pain.The AZA has set protocols for the USDA and they have avowed that no elephant will go to either of the two private elephant sanctuaries which have higher standards and accreditation than what the AZA gives.

To the USDA and the Congress: know that we see the corruption in the faces of miserable animals, we want their captivity improved and freedom be allowed when appropriate. No more animals should be brought into the US to go to aquariums, zoos or circuses. Congress should be brave enough to end this abuse as other countries have done. No animals in the circus, No large mammals in aquariums, No large mammals in zoos. In spacious sanctuaries only. The USDA & the AZA are the origin of all the suffering for captive animals. Please investigate and rectify. Be The Animals Voice. If you go to a zoo, aquarium or circus, go to protest it. And never ever buy a puppy from a pet store - adopt, don't shop.

Today: Save A. is counting on you

Save A. needs your help with "USDA! Stop Cruelty to Animals in Aquariums, Zoos, Circuses, Puppy Mills". Join Save A. and 13,739 supporters today