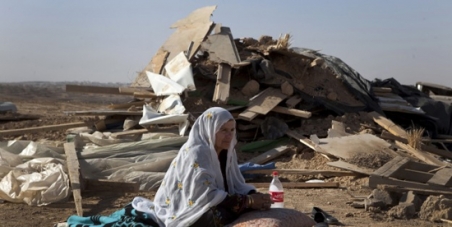 Ensure universal protection and recognition of all citizens of Israel

By continuing you agree to receive Avaaz emails. Our Privacy Policy will protect your data and explains how it can be used. You can unsubscribe at any time. If you are under 13 years of age in the USA or under 16 in the rest of the world, please get consent from a parent or guardian before proceeding.
This petition has been created by Heidi P. and may not represent the views of the Avaaz community.
x

After the most recent escalation in violence in the South, Sidreh (Bedouin women's organization) visited Arab Bedouin villages in the Negev, communities where we are engaged in cultural and economic development programs for women and families, to see how they were coping: two young girls were injured, a man was killed and four members of his family - including an infant, were injured. While citizens of Israel in adjacent locales were granted full protection, Arab Bedouin residents are still denied basic recognition, the respect of their rights, and protection in times of emergency.

- Due to many of the villages being denied government municipal status or recognition, these areas are defined as 'open areas,' (i.e. unpopulated). Therefore rockets fired into these villages are not intercepted by the Iron Dome system, leaving residents completely exposed. Approximately 80,000 children, women and men live in these so-called 'open areas.'

- Bedouin villages have no early warning or sheltering systems, leaving the people without any form of alert or protection

-Ambulances and firefighting services avoid responding to calls in these villages due to the lack of infrastructure and roads.

You can help us to make a difference by asking the US Congress to demand that US financial support to Israel benefit the protection of Israeli citizens without discrimination. This would require: The expansion of the Iron Dome defense system to cover and protect all Israeli citizens without discrimination; the provision of early warning and sheltering systems to all citizens; the recognition of their homes, lands and rural way of life; and the provision of services, including water, electricity, schools, clinics, roads, and such key infrastructure to allow the communities to develop.

Approximately 190,000 Arab Bedouins live in extremely unstable and challenging conditions. Over half of the population lives in 'unrecognized villages,' which are refused recognition by the State and therefore lack basic services. The residents live under the threat of eviction, are prevented from building proper structures or receiving government funds, and Bedouin homes are destroyed every day in a systematic program of house demolition. Six of the seven poorest localities in Israel are Arab Bedouin, and their unemployment rates are by far the highest in the country, reaching up to 80% in many villages.

Today: Heidi P. is counting on you

Heidi P. needs your help with "Ensure universal protection and recognition of all citizens of Israel". Join Heidi P. and 818 supporters today