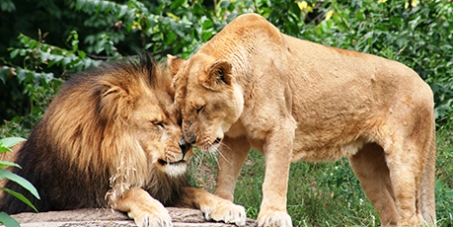 US Fish and Wildlife Service: Save the Lions from mass extinction

By continuing you agree to receive Avaaz emails. Our Privacy Policy will protect your data and explains how it can be used. You can unsubscribe at any time. If you are under 13 years of age in the USA or under 16 in the rest of the world, please get consent from a parent or guardian before proceeding.
This petition has been created by Marigona U. and may not represent the views of the Avaaz community.
x

We used to call them ‘kings of the jungle’ while they roamed fearlessly on the savannah: at times protective, at others fierce — yet, always proud. But, these images of African lions could soon end up becoming a long-lost memory unless we stop their ruthless killing by the multi-million dollar trophy hunting industry.

The lion population has declined by a shocking 90% since the 1950s and scientists are warning that they may be on the verge of extinction. An alarming 60% of trophy hunters in Africa are coming from the US. But, now, the U.S. Fish and Wildlife Service wants to list the African lion as endangered species and ban trophies that come from countries with no conservation programs from entering the US. Let's make sure that they hear our support during the public comments period.

This is an incredible opportunity to cut back the trophy hunting industry and help the recovery of African lion populations - let's turn the tide now. Sign the petition and share this with everyone you know.

Today: Marigona U. is counting on you

Marigona U. needs your help with "US Fish and Wildlife Service: Save the Lions from mass extinction". Join Marigona U. and 2,914 supporters today