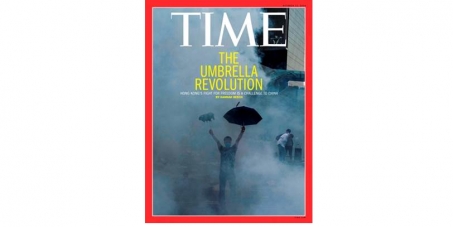 By continuing you agree to receive Avaaz emails. Our Privacy Policy will protect your data and explains how it can be used. You can unsubscribe at any time. If you are under 13 years of age in the USA or under 16 in the rest of the world, please get consent from a parent or guardian before proceeding.
This petition has been created by Michael C. and may not represent the views of the Avaaz community.
x

The occupy movement in Hong Kong to fight for democracy began on 28th September, 2014 and was dubbed “Umbrella Revolution” because protesters, many of whom are under-aged students, shielded themselves from military-grade pepper spray and teargas with umbrellas. The two-month-long occupation aims at achieving one basic human right: freedom. Freedom to elect and to be elected. A freedom which has been denied by China, an act that breached the Sino-British Joint Declaration, a treaty registered at the United Nations, as well as article 21 of the United Nations’ Universal Declaration of Human Rights.

Despite the peaceful nature of the protest and occupation, the police have been using unjustifiable and unreasonable degree of force on protesters including children under the age of 18: Police have deliberately and repeatedly targeted protesters’ faces at close range when spraying them with pepper spray. Several instances of this have been caught on camera – an old man who turned around as police tapped on his shoulder and got pepper sprayed straight into his face (http://goo.gl/Gsokkw).

In another egregious example, seven police officers were caught on camera beating up a handcuffed protester in a dark corner in Hong Kong’s Admiralty district – where the main protest site is situated. The widely-broadcast footage of police teargasing peaceful protesters on the night of 28th September set the tone for the atrocities which have followed.

After a major occupy site in Mong Kok was cleared by the police (violating the legal procedure of a civil injunction order) on 26th November, the brutality of the Hong Kong Special Administrative Region (Hong Kong SAR) Police Force escalated.

On the same night, people gathered in Mong Kok were not only pepper sprayed at. The police also deployed new weapons that eject CS liquid, instead of teargas, to maximise the impact but avoid triggering another outcry of the public. Police in helmets, batons and shields also charged at unarmed protesters without reason (http://goo.gl/dcOMFv).

Police not only threatened people by searching individuals - many of whom were minor and some were girls in school uniforms - with no legitimate reason, they also constantly provoked peaceful protesters verbally and waving their batons at people at close range – even though all protesters did was chatting-back.

Multiple videos captured by members of the public demonstrate that police in Hong Kong SAR have not only lost control of their temper but violated the Universal Declaration of Human Rights:

- Police threatened a young passerby who was walking slowly as told “if you’re scared, don’t go out”. The young man was pulled into the ring of police because of chatting-back and subsequently arrested (http://youtu.be/J-GNhzG65e8)

- A passerby got kicked in his head after a number of police already held him down on the ground (http://goo.gl/luAmDN and http://localpresshk.com/2014/11/mc-lau/) and was later told he was not being arrested – he was sent to the hospital and came out with two stitches on his head

- A passerby wearing yellow scarf (yellow is the colour symbolising Umbrella Revolution) walked toward the direction the police told him to and was smacked with a baton on the back of his neck (http://goo.gl/28RHxw)

- A policeman told a female Hongkonger of south Asian descent who was on the pavement in a non-cordoned-off area of Mong Kok to “go back to India”, and insulted her, calling her mentally ill (http://goo.gl/3LBbMO)

- Joshua Wong, a student leader of student activist group Scholarism who turned 18 this October, was attacked by the police on his private parts and verbally insulted (http://goo.gl/F7ubqr) after being arrested and he is banned from going to parts of Mong Kok before his trial

- A policeman ripped off a journalist’s press pass from his neck and denied any wrongdoing (http://goo.gl/voaXhZ)

- A journalist got arrested for attempting to steal a policeman’s gun (http://goo.gl/tTwvvi). It emerged shortly afterwards that the policeman in question was not even carrying a gun (http://bit.ly/1zyDzlj)

All these point to severe violations of article 5 and 20 of the United Nation’s Universal Declaration of Human Rights.
The Independent Police Complaints Council (IPCC) is the organisation responsible for investigating complaints against police officers’ wrong doings. From 2003 to 2013, IPCC endorsed 5,548 allegations on assault made by police officers, and only a grand total of FOUR substantiated (http://goo.gl/Ro6XUy). The disproportionally low number of substantiated cases and the vested interests IPCC’s committee members have in China and their pro-establish and pro-China political stance undermine Hongkongers’ confidence in the reliability and credibility of this allegedly independent council.

We ask that the United Nations Human Rights Council launch a formal and unbiased enquiry on the Hong Kong SAR Police Force and Hong Kong SAR Government over the abovementioned actions that have violated the Universal Declaration of Human Rights, as well as to investigate the People’s Republic of China for the violation of Hongkongers’ right to take part in their government by denying their right to democratic elections for Hong Kong’s legislature and government. We also ask that the United Nations to ban the use of chemical weapons, including teargas, which are banned in war, against civilians and protesters.

Today: Michael C. is counting on you