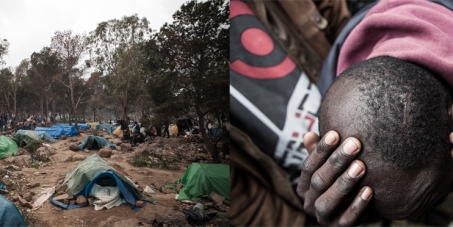 By continuing you agree to receive Avaaz emails. Our Privacy Policy will protect your data and explains how it can be used. You can unsubscribe at any time. If you are under 13 years of age in the USA or under 16 in the rest of the world, please get consent from a parent or guardian before proceeding.
This petition has been created by Saskia P. and may not represent the views of the Avaaz community.
x

Sign this petition
Saskia P.
started this petition to
United Nations
Tens of thousands of African migrants are currently living on a mountain surrounding the city Nador in Northern Morocco, constantly trying to climb the seven meter high barbed wire fences that separate Africa from the Spanish enclave Melilla. Near the boarder to Europe they are surviving under horrendous hygienic conditions, suffering from malnutrition and brutal oppression mainly by Moroccan border control and military. We want the United Nations to take action against the Moroccan authorities and improve the living conditions of the migrants.

According to the Moroccan Human Rights Organisation AMDH about 30.000 refugees find shelter among the atlas cedars high up on mountain Gourougou. Up to six people sleep in tiny patched up tents made from plastic sheets surrounded by rubbish as well as human and animal faeces. The tents, subdivided into the countries and regions the migrants come from, spread over hundreds of meters deep into the forest. Most of them originate from subsaharan states and put very long distances behind them to get to the borders to Europe. Melilla is its first ground in the North of Morocco and therefore the final destination on the African continent for a better life. The refugees who reached Gourougou try to climb the monstrous fences to the fortress of Melilla where they are not only hindered by the barbed wire but also by Moroccan and Spanish border guards armed with batons, rubber bullet guns and smoke grenades which they are not afraid of to utilise. Others attempt to swim along the Mediterranean coast to reach the Spanish enclave but there, too, border control of both Morocco and Spain shoot at them until the migrants either turn back or drown. Those who succeed to reach past the border will be either taken in, treated and provided for by Spanish authorities or turned back to Morocco. Therefore Spanish police bribe Moroccan border patrol by paying them. Along with a refugee comes an envelope filled with money.

Up high on Gourougou Moroccan military raid the camp regularly, often at dawn. They beat the migrants, take away their documents and passports as well as food and blankets, they even burn their tents. People with broken bones or other injuries, who desperately need medical attention, more and more prefer to stay on the mountain since in many cases of their hospitalisation they were anaesthetised and bereaved of their organs. The migrants only descend downhill to provide the most essential foods and commodities. The Moroccan people do not care for the sub-Saharan people, are even afraid of them due to local newspapers which depicted them as the “black danger” from the mountains last year. Hence there is no work for the migrants to be found anywhere.