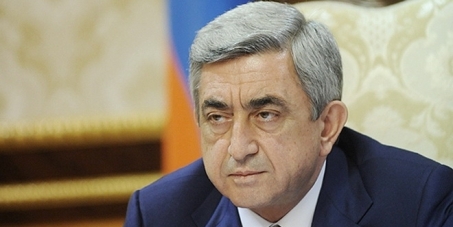 By continuing you agree to receive Avaaz emails. Our Privacy Policy will protect your data and explains how it can be used. You can unsubscribe at any time. If you are under 13 years of age in the USA or under 16 in the rest of the world, please get consent from a parent or guardian before proceeding.
This petition has been created by Shahin İ. and may not represent the views of the Avaaz community.
x

Sign this petition
Shahin İ.
started this petition to
United Nations Security Council
Unfortunately, Serzh Sargsyan,current President of Armenia,still remains unpunished by international organizations for his policy of attacking Azerbaijan for several times. Serzh Sargsyan commanded groups that organized Khojaly Massacre, in which hundreds of people were killed by Armenians. A massacre which saw the town of Khojaly strewn with rubbles, was committed by the Armenian armed forces, on 25-26 February 1992. As a result, hundreds of Azerbaijanis were killed or captured. His nonsensical statement “We wanted to give a lesson to Azerbaijan “ is not forgotten !
Khojaly Massacre was recognized and commemorated by 15 states of USA and 7 countries. In addition to Serzh Sargsyan`s war crimes, he was directly involved in the occupation of Nagorno-Karabakh and 7 surrounding districts.His military,political aggression has to be deprecated by the international community.
In 1993 the UN Security Council adopted four resolutions (822,853,874,884) demanding immediate and unconditional withdrawal of the Armenian forces from the occupied territories. However, these resolutions remain unimplemented, remain on paper.

Today: Shahin İ. is counting on you