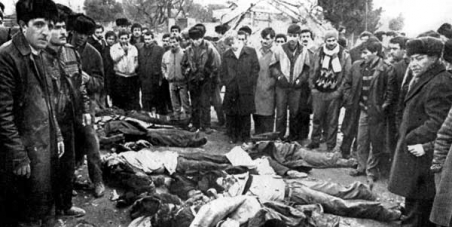 By continuing you agree to receive Avaaz emails. Our Privacy Policy will protect your data and explains how it can be used. You can unsubscribe at any time. If you are under 13 years of age in the USA or under 16 in the rest of the world, please get consent from a parent or guardian before proceeding.
This petition has been created by Shahin İ. and may not represent the views of the Avaaz community.
x

Sign this petition
Shahin İ.
started this petition to
United Nations Security Council
On January 19,1990, Mikhail Gorbachev who broke the rules epitomized by 119th article of the USSR Constitution, as well as, 71th article of the Azerbaijan SSR Constitution, sent troops to Baku. State of emergency was declared only 8 hours after those murderous incidents. One of the crimes against humanity - mass murder of Azerbaijanis by Soviet Union troops in “Black January “ will always remain as a bloody page in the history of humanity. These incidents were the very first stages of the Independence Movement. Ominously, this crime was not recognized and commemorated at international level. According to official estimates 134 civilians were killed, at least 600 people were injured, including representatives of 5 nations, children and women.
Report this as inappropriate
There was an error when submitting your files and/or report.
Inaccurate Inappropriate language Hate speech Illegal Commercial/spam Offensive
×

Today: Shahin İ. is counting on you