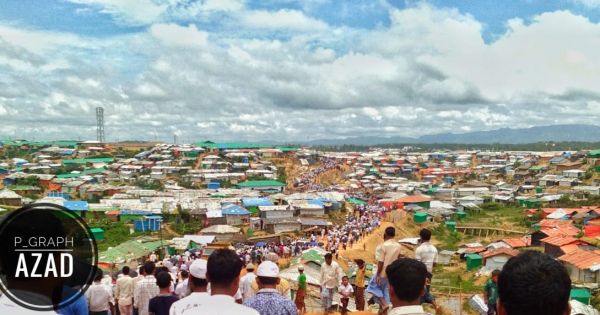 Ring the Alarm on Rohingya Crisis

By continuing you agree to receive Avaaz emails. Our Privacy Policy will protect your data and explains how it can be used. You can unsubscribe at any time. If you are under 13 years of age in the USA or under 16 in the rest of the world, please get consent from a parent or guardian before proceeding.
This petition has been created by Rohingya C. and may not represent the views of the Avaaz community.
x

Sign this petition
Rohingya C.
started this petition to
United Nations Security Council
End the persecution of the Rohingya people. We need to raise the alarm and get the world to act.

“There have to be rights for Rohingya in Myanmar before we go back.” Rohingya refugee woman, Kutapalong, Bangladesh.

Two years ago, nearly 3/4 of a million Rohingya people were forced to flee ethnic cleansing in Myanmar into Bangladesh. A UN Fact Finding Mission recommended that top Myanmar military commanders be prosecuted for genocide, yet the international community have failed to act.

Rohingya people in both Myanmar and Bangladesh still face an ongoing human rights crisis. Around 128,000 predominantly Rohingya Muslims are forced to live in internment camps in Rakhine State, Myanmar. Other Rohingya in Rakhine still face ongoing persecution and violence.

Restricted from leaving their villages, even in a medical emergency, Rohingya in Rakhine describe living in a ‘prison’ – they are confined, segregated and stripped of their humanity. Refused basic rights such as citizenship, education and freedom of movement, they feel they have no future.

“As a young man growing up in segregation with no freedom of movement, no education, we can’t do business, and for us we don't know how many years more we will be here, it's a kind of hell, not just for me but for everyone.”  Rohingya IDP living in a camp in central Rakhine

Reports last month show that this violence in Rakhine continues. Rohingya villages continue to be burnt to the ground and Rohingya continue to cross the border into Bangladesh in search of safety. There, they face long term exile, living in dangerous and cramped camp conditions, desperate to go home, but unwilling to do so until they are guaranteed their rights.

“If we get justice we will go willingly with happiness. We can swim or walk back, but we want justice.”  50-year-old woman, Unchiprang Camp

Join us in calling on the UN Security Council to act and pass a UNSC resolution that: