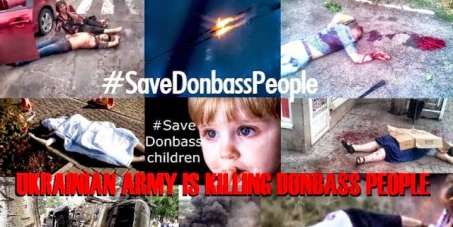 By continuing you agree to receive Avaaz emails. Our Privacy Policy will protect your data and explains how it can be used. You can unsubscribe at any time. If you are under 13 years of age in the USA or under 16 in the rest of the world, please get consent from a parent or guardian before proceeding.
This petition has been created by Lena B. and may not represent the views of the Avaaz community.
x

The Ukrainian government, which came to power due to military takeover, announced people in the South-Eastern Ukraine terrorists and separatists for not acknowledging them. The so-called punitive action started on the 14th of April 2014. Since the 15th of April Slaviansk has been under constant attacks, later Kramatorsk and Mariupol. The burning of people in Odessa on the 2nd of May was a distinct picture of the people who came to power: over 40 people were either burnt alive or beaten to death by the *right wing* when they tried to get out of the building (according to some other sources over 50 people died, some claim there were total of 200 bodies which were found later in the basement), even police was shooting people who appeared in the windows to get some air! The police claimed the ones at the windows had guns however no guns were found, multiple videos of the policeman shooting people prove it as well. Until now nobody has been punished!
On the very first day of Poroshenko's presidential rule Donetsk was bombed by planes and helicopters (the 26th of May), as a result the airport, the rail road station and a factory with workers were bombed, a kindergarten was shot (fortunately there were no children there). Nobody can tell exactly how many people were killed during this operation however the morgues are full. During the 1st day of bombing in Donetsk a 7-year old child was wounded.

It has become very popular for oligarchs to form their own private army and lead them against people in the East. Kolomoysky's Army is a perfect example: they showed up in Krasnoarmeysk on the 11th of May (the referendum day in Donetsk and Lugansk counties), disrupted the referendum and shot several unarmed civilians dead.

According to the Constitution of Ukraine, Ukraine is a democratic nation state and all the power belongs to people. A human, his life and health, honor and dignity, integrity, safety and security are declared to be the highest social value in Ukraine. Nevertheless this Constitution is being trampled by the very “servants of the people”. As you can see from all the events, democracy exists only until the citizens of the country either agree or do not contradict to the decisions of the people in power. As soon as a part of the country (fyi: the population of Donetsk and Lugansk counties alone amounts over 7 million! People) speak up against the policies of Kiev, the army and air forces are sent against them, residential areas, hospitals and even kindergartens are bombed and shot. Just recently on the 2nd of June Ukrainian air force fired over 150 unguided missiles at Lugansk! 8 killed and 20 wounded unarmed civilians!

Deputies who oppose the lead policies get their microphones in Rada during their speeches turned off, are escorted out of the convention hall are threatened and bodily harmed (example: Oleg Tsaryov, Piotr Simonenko)

Ukrainian government will not stop until they destroy the population of the Eastern Ukraine! These claims were made by every member of the Ukrainian junta: Turchinov, Poroshenko, Timoshenko, Yatseniuk and many more. Poroshenko announced he would wipe Slaviansk off the face of the Earth!
We ask UN to stop the Ukrainian military actions in the South-Eastern Ukraine by removing all Ukrainian forces from the area and disarming all the parties. We demand the trial of the current government for crimes against people.

8th of June: a 6 year old gilI is killed in Slaviansk during bombing

19th of June: a 5 year old boy is severely wounded during another bombing of Slaviansk. Arseniy died several hours later, his mother had been killed instantly during the attack

Odessa, policeman shooting people in the building and lying about him being wounded in a leg (see the camera go down showing his legs): https://www.youtube.com/watch?v=qu0E5Mvjuko

Russian journalist appealing to journalists comminity around the world: http://dobriy-eekh.livejournal.com/587654.html

Today: Lena B. is counting on you

Lena B. needs your help with "United Nations: Stop military actions in the Eastern Ukraine". Join Lena B. and 4,632 supporters today