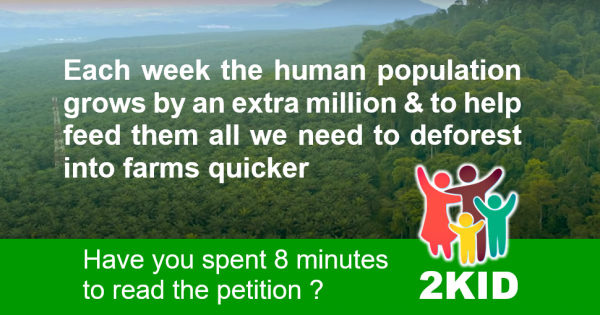 By continuing you agree to receive Avaaz emails. Our Privacy Policy will protect your data and explains how it can be used. You can unsubscribe at any time. If you are under 13 years of age in the USA or under 16 in the rest of the world, please get consent from a parent or guardian before proceeding.
This petition has been created by 2 K. and may not represent the views of the Avaaz community.
x

Sign this petition
2 K.
started this petition to
United Nations
Our proud charitable mission is to save wildlife & reduce extinctions, climate change & pollution, by education & awareness.

Each week the human population grows by an extra million. That's an extra million births over deaths. We & our supporters believe this is the single biggest & taboo environmental problem.

This is why almost no countries are achieving their Paris carbon goals as recycling & green investment cant keep up with rising consumption from rising populations.

Most couples around the planet, including 3rd world couples, now choose to stop at 2 kids or less, which unfortunately means there are still millions of 1st & 3rd world couples having 3, 4, 5, 6, 7 or 8 kids.

So we have set up this charity & petition to help educate & influence more couples to proudly choose a sustainable 2 kids or less . Harry & Meghan kindly announced their 2 kid choice in 2019 for the good of the environment.

And we are not criticizing couples for having more than 2 kids in the past,  as most don't or didn't know about the extra million a week.

The population is almost 8 billion & we  are quickly heading to 12 billion  which is the generally accepted maximum the planet can feed, house & transport, & all at great expense to wildlife & the environment.

In 2017 Germany kindly took in a million refugees whose carbon footprint will now be quickly growing as most get cars and larger houses. Over the coming years it appears most developed countries are going to have to increase their refugee intake by millions.

We the signatories are respectfully petitioning all nations  to call for a world 2 kid family choice, as we are confident this is the most important contribution any one of us can do to help bring a sustainable balance to our earth.

We believe many more millions will be enlightened and eventually adopt this choice, which will slow the population growth & save wildlife & reduce extinctions, climate change & pollution.

We also want to stop the ancient mindset of praising & encouraging large families by raising awareness of the million a week.

Some of mankind will claim this petition is denying them enjoyment of life , but it’s going to give their children & grandchildren more life, with more wildlife & less pollution, on a more balanced earth. Stopping at 1 or 2 is no sacrifice.

And you are most welcome to sign this petition even if you have already had more than 2 kids, as you now understand & think it is a good solution for a sustainable planet going forward.

We are a moderate, contraception, family planning & education charity  for the good of our environment.

The good thing about this call is if we are wrong , we are not going to hurt anything, including economies, as this movement will not stop population growth, but hopefully slow it. And what's the point of being a multi millionaire if the planet dies.

To help with our mission we are also asking governments to stop encouraging large families with taxpayer subsidies for kids beyond 2. And to make all contraception totally free including pills, condoms, vasectomy & tube ties. And for all schools to begin educating the million a week problem.

Many are calling for this choice to be in third world countries only, but there are millions of 1st worlders having large families as well. And you cannot have one call for 3rd worlders & another for 1st worlders. The first world must lead by example. This movement is simple. One choice for everyone, whether you're rich or poor.

This petition is ready for when mankind want to tell their governments they want it promoted as one of many good solutions. Petitions are just a tool for that. If it doesn’t become popular, we don’t mind, but we do predict it will go viral once the population hits 9 billion. Unfortunately that may be too late. Birth rates are lowering, but this petition will help them reduce quicker, saving huge numbers of wildlife & pollution.

We thank you so very much for your kind support

Sincerely the founders of this petition

Owners of the family icon mark in regard to 2 kid choice & the 2KID brand & the world 2 kid family call. Copyright © 2019 onwards. All rights reserved. We are a proud New Zealand based unregistered charity that may become registered if this petition becomes popular.