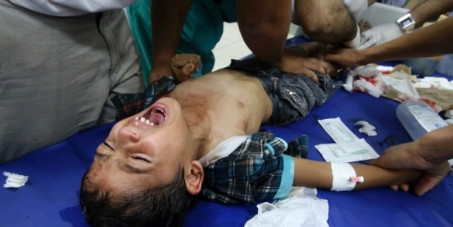 In light of the escalating humanitarian crisis in Gaza, we are deeply saddened and concerned with the loss of civilian, and especially, children’s lives. According to the United Nations, over 80% of the 1677 Palestinians killed are civilians. 378 children have been KILLED. 9078 Palestinians have been injured in Gaza in less than 4 weeks, including, 2744 CHILDREN, 1750 females, 343 elderly.

The United Nations has condemned these actions against civilians in Gaza as War Crimes. The UN High Commissioner for Human Rights has said that she sees "a recurrence of the very acts" from the 2009 Gaza war in which the U.N. concluded Israel deliberately targeted civilians.

The US is complicit in these war crimes by the fact that The United States spends over $8.5 million a DAY in military aid to Israel. This is at least $3.1 billion dollars a year! The Congressional Research Service’s conservative estimate of total cumulative US aid to Israel (not adjusted for inflation) from 1949 through 2014 is $121 billion.

Aid to Israel represents more than half of the total U.S. annual budget for foreign military financing. Israel's GDP is so high that they are working on creating a Sovereign Wealth Fund. All of this while using the most advanced U.S. weaponry in the world to massacre thousands of innocent women and children. They claim they are targeting the Hamas organization. Yet 1.8 million Palestinians, trapped in a tiny 139 square mile prison, had their land stolen from them and have no army and nothing, equivalent to Israel's army. It would be like Hercules beating on a 10yr old who occasionally kicks him back! This isn't about taking sides. This is about saving lives! We deeply condemn Hamas's actions of violence.

While the media has portrayed that the violence began with Hamas kidnapping three Israeli settlers, this has, in fact been shown to be incorrect. The settlers were not kidnapped by Hamas at all. Hamas did not attack Israel first. Israel bombed the homes of three families and killed two Palestinians (one of whom was 10-years-old) in Gaza before a single Hamas rocket was launched back. We are not condoning any violence from either side, we just wanted to set the facts straight. For the record, we stand strongly against Hamas and any tactics of violence used against civilians.

The Palestinians have had their land illegally occupied according to International Law since 1967, and consistently suffer human rights abuses, including child imprisonment, imprisonment without due process, being subjected to illegal weapons, denial of medical care, etc. The UN has repeatedly condemned Israel’s illegal occupation of the Palestinian territories. The International Court of Justice, the UN General Assembly and the United Nations Security Council regards Israel as the "Occupying Power". UN Special Rapporteur Richard Falk called Israel’s occupation "an affront to international law."The Israeli High Court of Justice has ruled that Israel holds the West Bank under "belligerent occupation". According to Talia Sasson, the High Court of Justice in Israel, with a variety of different justices sitting, has repeatedly stated for more than 4 decades that Israel’s presence in the West Bank is in violation of international law.

We call upon the United States to become a facilitator of peace, rather than a funder of war. By using US taxpayer money to fund an illegal occupation, and war crimes, you are tainting our hands with the blood of the innocent.

We want no more to do with funding Israel’s occupation and war crimes.

Please stop ALL US Aid to Israel!

The Cost of Israel to US Taxpayers: http://www.ifamericansknew.org/stat/cost_of_israel.html

The Staggering Cost of Israel to Americans: http://www.ifamericansknew.org/download/StaggeringCost.pdf

The Impact of the Conflict on Children: http://www.ifamericansknew.org/stat/children.html

Today: HANAN Z. is counting on you