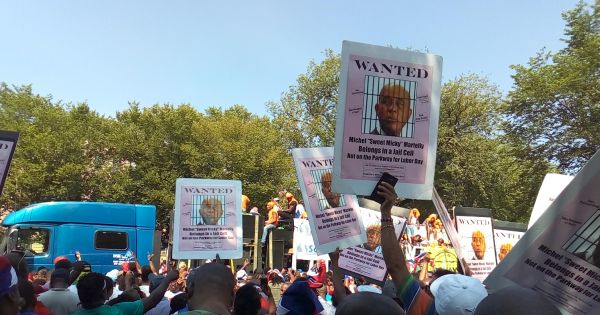 No! to Michel Martelly aka Sweet Micky on Eastern Parkway for Labor Day

By continuing you agree to receive Avaaz emails. Our Privacy Policy will protect your data and explains how it can be used. You can unsubscribe at any time. If you are under 13 years of age in the USA or under 16 in the rest of the world, please get consent from a parent or guardian before proceeding.
This petition has been created by KOMOKODA N. and may not represent the views of the Avaaz community. Warning: Some of the information presented in this petition could not be verified, so it might contain false or misleading statements.
x

Sign this petition
KOMOKODA N.
started this petition to
WIADCA; NYC Mayor Bill de Blasio; Public Advocate Jumaane Williams
We are signing this petition to demand that the West Indian American Day
Carnival Association (WIADCA) no longer allow the participation of
Michel “Sweet Micky” Martelly as a band representing Haiti and the Haitian
community on the Parkway during its yearly “Labor Day Carnival” which has over
the years become a symbol of Caribbean presence and pride in New York City.

Long before the fraudulent 2011 elections through which Mr. Martelly was
imposed on our country as president, many Haitians denounced and shunned him as
an entertainer because of the violent, obscene, and misogynous lyrics in his
music. References to the masses of the Haitian population as stupid and smelling
of feces, glorification of rape and all forms of abuse of women are common in
his music. His time in office was marred by assassinations and arbitrary arrests,
detentions of political opponents and rampant corruption with the plunder of the
national treasury, the theft of billions from Venezuela’s Petro Caribe
program which was long-term, low-interest loans meant to help with the
development of our country. Martelly also imposed an illegal money transfer
remittance tax and a phone call tax on the Haitian diaspora supposedly to send
every child to school but no one knows how many hundreds of millions, if not
billions, he collected and what has been done with this money.

We do not believe that Michel Martelly’s history as a private individual,
as a performer, nor as a public official reflects anything that is positive,
elevating, or can in any way bring pride to Haiti or the Caribbean community.
Organizations and individuals in the NYC Haitian community and in other
parts of the Haitian diaspora have consistently protested Martelly’s presence
whenever he has had an announced public appearance in our respective areas.
Community pressure forced New York CityParks SummerStage to cancel
Martelly’s advertised August 21, 2016 free concert at Central Park’s
Rumsey Playfield and his August 31, 2018 performance at Chez Mirelle’s in
Westbury, Long Island. The Haitian cities of Gonaives and Jacmel actually banned
Martelly from their 2018 carnival celebrations. This year, the Montreal Haitian community,
Women's groups and social justice organizations, as well as local elected officials'
pressure, including Montreal Mayor Valérie Plante, forced the cancellation of a
March 22nd, 2019 concert he was scheduled to perform in Montreal, Canada.

In the 2018 Labor Day Carnival, the Haitian community and our allies vociferously
protested Martelly’s presence throughout the parade route. That protest
reverberated throughout the Haitian diaspora and inside of our country, Haiti.
In the event that WIADCA decides to once again this year allow this degenerate
on the Parkway to spew his venom, we will be there again, in greater numbers
and louder than ever, protesting Martelly as well as the West Indian American
Day Carnival Association.

Link to video of protest against Martelly at 2018 Labor Day Carnival:
https://youtu.be/KyRFfXI0qdY

The New York City Haitian community Organizations who have initiated this petition are: