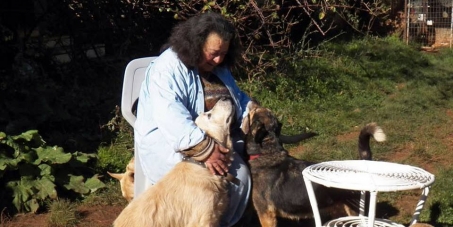 We say NO to the violent & illegal removal of 30 dogs from the private dog shelter of Mrs Niki at Velina, Corinth

By continuing you agree to receive Avaaz emails. Our Privacy Policy will protect your data and explains how it can be used. You can unsubscribe at any time. If you are under 13 years of age in the USA or under 16 in the rest of the world, please get consent from a parent or guardian before proceeding.
This petition has been created by Βασίλης Μ. and may not represent the views of the Avaaz community.
x

Sign this petition
Βασίλης Μ.
started this petition to
The signatures are addressed to the Mayor of Sikion, Mayor of Sikion, Mr Spiros Stamatopoulos (d-sikyon@otenet.gr), The following recipients will also be notified: 1. His Beatitude, Hieronymus II, Archbishop of Athens and All Greece 2. Novice Magistrate Mrs Akrivi Tabakopoulos 3. Novice Magistrate Mrs Sofia Bakanaris 4. Public Prosecution of Court of First Instance of
With an unprecedented and not legitimate decision in the annals of our country, the novice Magistrate of Sikion Mrs Akrivi Tabakopoulos orders that 30 former stray dogs, tended and hosted by Mrs Niki Doukas at Velina, Corinth, must be removed. The Magistrate does not assign the responsible persons for the realization of the decision; she does not define the procedure. She just gives the right to the opposing party to undertake the removal by themselves and charge Mrs Niki Doukas.
What is about to happen, because of the inadequacy and indifference of services of the Municipality of Sikion (Main office: Kiato, Corinth) and of the Mayor himself Mr Spiros Stamatopoulos, will be that the dogs are to be abandoned in an unknown area and be led to certain death, either due to –very frequent in Greece- phenomena of abuse or due to lack of food (it must be noted that after long-term hospitality the dogs do not know how to search for food and water and “stray life” is unknown to them). Mrs. Tabakopoulos, the Magistrate, overlooks the fact that the Municipality has no relative infrastructure, there is no animal-friendly association to take care of the dogs, no qualified individuals to capture the stray animals hosted within Mrs. Doukas’ fenced area, no vehicles for their transport or area for their settlement until their adoption.
Law No. 4039/12, article 9, calls for the rehabilitation of stray animals, however under specific preconditions, that is provided that the Municipality has them sterilized, they have remained at Municipal facilities for a very short term and are aware of the stray condition and that the Municipality has taken measures for their further nutrition and care in general.
This unheard decision, overlooking all the above, simply mandates that the animals should be removed, even by the opposing party, when those in charge for the management of the animals are the Municipalities and the animal-friendly associations exclusively. It must be understood at last that the animals are no chairs / tables / carpets, so that somebody needs only no matter what vehicle and a driver’s license to manage them.
On the 4th of September 2013, Nationwide Animal-Friendly & Environmental Federation and its President Mrs. Natassa Bobolakis in particular, sent a letter to the Mayor of Sikion, Mr. Spiros Stamatopoulos, in which all the above were listed. Until today and despite systematic attempts to contact the Mayor, this had not been accomplished. However, today, 10th September 2013, the Mayor contacted Mrs. Bobolakis and in an intense tone claimed that the Municipality performs work regarding stray pets and in case no apology is provided on behalf of Mrs. Bobolakis regarding the content of the letter, he has no intention to take any action for Mrs. Niki Doukas’ case.
In this context, we ask from the Mayor to inform us which articles of Law No 4039/12 (who has been valid since March 2012) he has implemented in the area of the Municipality (number of sterilizations, number of dogs nursed, number of fines imposed at owners who had not put a marking microchip to their pets, number of fines imposed for incidents of active or passive animal abuse). That is, we ask him to describe the whole work on the management of urban fauna realized by the services of the Municipality of Sikion.
More about Mrs. Niki Doukas' case on https://www.facebook.com/pages/%CE%97-%CF%80%CE%B5%CF%81%CE%AF%CF%80%CF%84%CF%89%CF%83%CE%B7-%CF%84%CE%B7%CF%82-%CE%BA%CF%85%CF%81%CE%AF%CE%B1%CF%82-%CE%9D%CE%AF%CE%BA%CE%B7%CF%82-%CF%83%CF%84%CE%B7-%CE%92%CE%B5%CE%BB%CE%AF%CE%BD%CE%B1-%CE%AD%CE%BD%CE%B1-%CE%AC%CF%84%CF%85%CF%80%CE%BF-%CE%BA%CF%85%CE%BD%CE%BF%CE%BA%CE%BF%CE%BC%CE%B5%CE%AF%CE%BF-%CF%83%CE%B5-%CE%BA%CE%AF%CE%BD%CE%B4%CF%85%CE%BD%CE%BF/434499236646146?fref=ts

Today: Βασίλης Μ. is counting on you

Βασίλης Μ. needs your help with "We say NO to the violent & illegal removal of 30 dogs from the private dog shelter of Mrs Niki at Velina, Corinth". Join Βασίλης Μ. and 2,983 supporters today