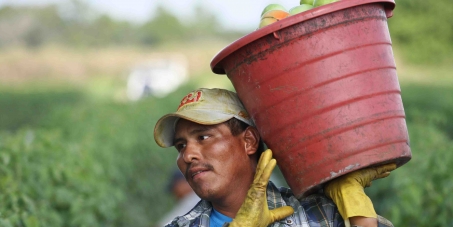 By continuing you agree to receive Avaaz emails. Our Privacy Policy will protect your data and explains how it can be used. You can unsubscribe at any time. If you are under 13 years of age in the USA or under 16 in the rest of the world, please get consent from a parent or guardian before proceeding.
This petition has been created by Coalition O. and may not represent the views of the Avaaz community.
x

Incredibly, after a more than two-decade long struggle, things are finally changing, at least in Florida. Thirteen major retailers including McDonalds, Burger King, Subway, TacoBell, and Wal-Mart, have agreed to enforce human rights standards for their Florida tomato suppliers and pay a penny more for every pound for Florida tomatoes they buy, to fund the first real wage increase for farmworkers in over 30 years.

However, Wendy's CEO has refused to make the same commitment to ensuring human rights in its tomato supply chain, making it the the only one of the five largest fast food companies in the US that has not yet joined the Fair Food Program.

Just this week, the Student/Farmworker Alliance declared a nationwide student boycott of Wendy's. In a few months' time, hundreds of these students and other Fair Food allies will join farmworkers at Wendy's 2015 Stockholders Meeting! At the meeting, farmworkers will have a chance to directly address Wendy’s CEO Emil Brolick and hand deliver all of your signatures, demonstrating the thousands of conscientious consumers who are calling for justice in the fields.

Add your voice to the rising call for Wendy’s to respect farmworkers' rights, pay the penny, and show farmworkers the dignity they deserve. Let’s let Wendy’s know that the time for Fair Food is now!

Today: Coalition O. is counting on you