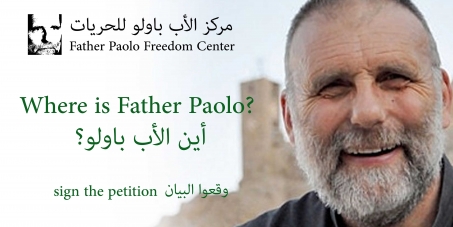 Where is Father Paolo?

By continuing you agree to receive Avaaz emails. Our Privacy Policy will protect your data and explains how it can be used. You can unsubscribe at any time. If you are under 13 years of age in the USA or under 16 in the rest of the world, please get consent from a parent or guardian before proceeding.
This petition has been created by Father P. and may not represent the views of the Avaaz community.
x

Sign this petition
Father P.
started this petition to
Ahmad Assy Al Jarba, Head of the National Coalition of Syrian Revolutionary & Opposition Forces, International Federation of Journalists (IFJ)
Where is Father Paolo? Why is there not enough media attention? Why are the Syrian Opposition not taking this seriously? There has not been enough media attention on the whereabouts of Father Paolo, a priest who served in Syria for many years and in 2011 chose to join in solidarity with the Syrian people’s call for freedom. It is important that more light is shed on this case as to apply pressure on those who have him captive and open way for negotiations over his release.

Father Paolo Freedom Center (FPFC) call on all intellectuals, politicians and those genuinely concerned around the globe to sign and share this petition to push for investigation and immediate action in finding out the whereabouts of Father Paolo dall'oglio. FPFC and those who sign this petition see importance that all the parties involved in the disappearance of Father Paolo to help reveal his whereabouts in the soonest time possible. FPFC also calls on all individuals, groups or organizations that have any evidence or information regarding Father Paolo's disappearance to be forwarded to FPFC or the International Federation of Journalists (IFJ) to contribute to finding out the truth.

Father Paolo took a sudden trip to the province of Raqqah on the 28th of July 2013 with intention of meeting with the leader of the Islamic State of Iraq and Syria (ISIS) who goes under the name: Abu Maria al Qahtany. He wished to also meet with other influential individuals in ISIS and Jabhat al Nusra. The goal of the meeting was to encourage the groups to take another look into considering the release of an Italian Journalist and a group of other journalists who had been taken captive by the groups. It’s worth noting that that Father Paolo's disappearance took place on the same day he participated in an evening demonstration held by civil society activists in the province in which he gave a speech hailing the liberated city and encouraging civil society expansion.

Today: Father P. is counting on you

Father P. needs your help with "Where is Father Paolo?". Join Father P. and 1,158 supporters today