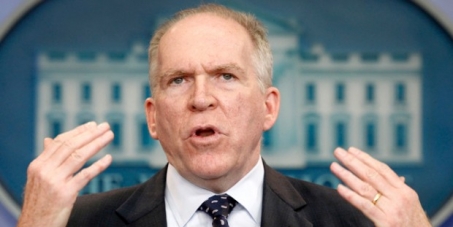 Withdraw John Brennan from consideration for Director of the CIA

By continuing you agree to receive Avaaz emails. Our Privacy Policy will protect your data and explains how it can be used. You can unsubscribe at any time. If you are under 13 years of age in the USA or under 16 in the rest of the world, please get consent from a parent or guardian before proceeding.
This petition has been created by M. S. and may not represent the views of the Avaaz community.
x

Sign this petition
M. S.
started this petition to
President Barack Obama
The nomination of John Brennan as Director of the CIA firmly places the US on the wrong side of international human rights standards as well as our own Constitution. The following article outlines some of the most egregious offenses Brennan has already committed, many with the complicity of the President. If you open the link at the end, you can also look at the hyperlinks in the original piece that corroborate the allegations:

Brennan is closely identified with the Obama administration’s expanded policy of using drones, or remotely piloted aircraft, to strike at suspected militants in countries such as Yemen, Somalia and Pakistan. The Washington Post refers to Brennan as “the principal architect of a policy that has transformed counterterrorism from a conventional fight centered in Afghanistan to a high-tech global effort to track down and eliminate perceived enemies one by one.” The Post adds that Brennan is at the “core” of the White House centered effort to use drones and that “when operations are proposed in Yemen, Somalia or elsewhere, it is Brennan alone who takes the recommendations to Obama for a final sign-off.”

What has this meant for people on the ground in Yemen and Pakistan? Disaster, in a word. The drone strikes have killed scores of civilians in those countries, sparking widespread anger at the United States and, in some cases, driving people into the arms of extremists who despise the U.S. According to the Bureau of Investigative Journalism, which closely tracks U.S. drone strikes, 290 civilians have been killed in Pakistan as a result of the Obama administration’s drone program.

Brennan has also been the administration’s public face when they feel the need to explain their program of targeted assassinations. Brennan gave the first public acknowledgement of the Obama administration’s drone strike program in an April 30, 2012 speech at the Woodrow Wilson Center in Washington, D.C.

He’s also a serial misleader on the drone program. “There hasn’t been a single collateral death because of the exceptional proficiency, precision of the capabilities we’ve been able to develop,” Brennan said in June 2011. But as Micah Zenko points out in Foreign Policy, there have been many “public reports — from Pakistani and Yemeni reporters and anonymous administration officials — of civilians killed by U.S. drone strikes.”

Zenko also points out another of Brennan’s misleading statements on drone strikes. In an August 2012 speech, Brennan claimed that “contrary to conventional wisdom, we see little evidence that [drone strikes] are generating widespread anti-American sentiment or recruits for AQAP. In fact, we see the opposite: Our Yemeni partners are more eager to work with us.” But Brennan is dead wrong on this. As Yemen expert Gregory Johnsen wrote in The New York Times, “Brennan’s assertion was either shockingly naïve or deliberately misleading. Testimonies from Qaeda fighters and interviews I and local journalists have conducted across Yemen attest to the centrality of civilian casualties in explaining Al Qaeda’s rapid growth there. The United States is killing women, children and members of key tribes.”

3. Supporter of Immunity for Telecom Companies

In 2008, as the debate over telecom immunity raged, Brennan said: “I do believe strongly that they should be granted that immunity, because they were told to do so by the appropriate authorities that were operating in a legal context, and so I think that’s important.” This line of reasoning, later implemented into the law, shields corporate communication companies from lawsuits from customers who may have been unlawfully spied on.

Brennan is opposed to waterboarding, the most infamous torture tactic of the Bush years. But on other aspects of the torture program, he’s more supportive. “A lot of information… has come out from these interrogation procedures that the agency has in fact used against the real hard-core terrorists. It has saved lives,” he said in 2007, while he was a CIA aide. The New Yorker’s Jane Mayer described Brennan as a “supporter” of the CIA’s torture program.

And what were these CIA tactics that Brennan is referring to? They included slamming detainees’ heads against walls; prolonged standing in stress positions; beating and kicking; prolonged shackling of hands and feet; and much more.

Closely connected to the Bush administration’s torture regime was its program of extraordinary rendition–the term given to the practice of abducting suspected terrorists from one country and secretly shipping them to another country, where they would be interrogated and tortured. Brennan was in full support of this program.

In 2005, Brennan described extraordinary rendition as “an absolutely vital tool” that “without a doubt has been very successful as far as producing intelligence that has saved lives.” What Brennan left out is that rendition often delivered people to brutal regimes where they were tortured at the behest of the U.S. And, while it certainly nabbed extremists trying to attack the U.S., innocent people were also caught up in the operation. Maher Arar is the most visible face of how the rendition program went wrong: a dual Syrian and Canadian citizen, Arar was detained by the U.S. in 2002 and then deported to Syria where he was tortured on suspicion of being a member of Al Qaeda. Turns out he was nothing of the sort, and the Canadian government has since apologized to Arar.