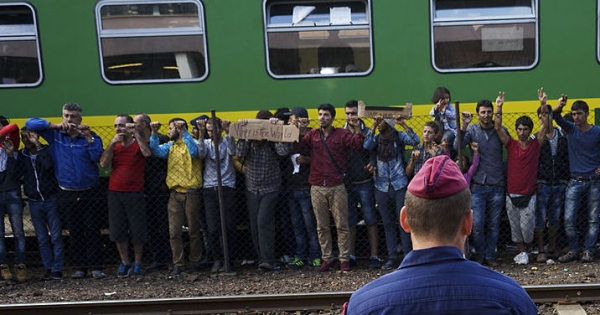 World leaders: We need a global commitment to protect refugees and migrants.

By continuing you agree to receive Avaaz emails. Our Privacy Policy will protect your data and explains how it can be used. You can unsubscribe at any time. If you are under 13 years of age in the USA or under 16 in the rest of the world, please get consent from a parent or guardian before proceeding.
This petition has been created by Rachel P. and may not represent the views of the Avaaz community.
x

We invite you to sign on to the letter below, calling for a global response to the refugee crisis, that respects the rights of displaced people and confronts the root causes of displacement, including violence, poverty, inequality, and persecution.

We are a global community of scholars from a range of disciplinary and geographic perspectives . We are concerned about the refugee crisis that is presently unfolding in the wider Mediterranean region and distressed by the inadequacy of official responses thus far.

We face two urgent moral tasks: (1) to ensure the safety and well-being of those who have been forced to move; and (2) to address the systemic problems that are forcing people to migrate in the first place, so that migration will always be a choice and not a necessity. The first is most immediate, but ultimately the second is most important.

The global community’s long-term aim should be to address the patterns of violence, poverty, and uneven development that force people to leave their homes. Context matters. We must recognize that these patterns are features of an international system – of geopolitical maneuvering, resource extraction, trade and finance – largely designed by a small number of rich countries that derive great material advantage from it. It is crucial to protect the victims of this system and to work for its reform. This includes working to end resource wars, stemming illicit flows of capital out of developing countries, making trade regimes fairer, respecting national sovereignty, and responding to climate change.

The present crisis offers a monumental opportunity to turn tragedy into a positive global legacy. It was out of the chaos and mass displacement of the early 20th century that, as a global community, we created the Universal Declaration of Human Rights and the Refugee Convention with its Protocol, and a variety of structures to ensure peace, security and justice for all. Yet today, with the UN High Commissioner for Refugees estimating that the number of displaced people worldwide is at an all-time high, those structures are being tested.

Now is the moment to re-assert our global commitment to peace, security and justice. This is a collective and ongoing endeavour that goes beyond the narrow territorial concerns reflected in the focus on border control. As an international community, we must find new ways to work together.

At the same time, we must uphold more immediate responsibilities. The responses of citizens and communities globally to the current mass movement have far outstripped in human compassion the responses of most governments. We call upon all governments, including European and Gulf States, but also those further afield, to offer sanctuary to those who need it. This includes swift access to humanitarian protection (including support to those crossing the Mediterranean); opportunities for work and livelihood; and the registration of children born to displaced families. We urge national and international bodies to prioritise additional funding for refugees (that does not deplete existing aid or climate change commitments); and to ensure that efforts to ‘fight trafficking’ do not become an attempt to prevent migration.

Closing borders to stop people moving is not a solution. Research shows clearly that blocking individuals at points along their journey pushes them to find new migration strategies, which only makes their situation more precarious.

We need a political commitment from regional and international entities to work together. For example, we urge European states to redouble efforts to build a genuinely humanitarian European-wide response, and to provide resources and mandate to EU institutions to coordinate a truly effective response: to both protect those migrating today and to stop the likelihood of such movement in the future. A global response that addresses the systemic drivers of mass displacement (including conflict, uneven development, generalised violence and persecution of minorities) has the potential to create a positive global legacy in response to the biggest migration challenge of the twenty-first century.

----
The letter has been signed by the ASAP Global Board and chapters/associate chapters in Austria, Brazil, Canada, Chile, Germany, Greece, India, Oceania, Portugal, Romania, Spain, United Kingdom, United States, and West Africa, as well as members of the ASAP Global Colleagues Program.

For a list of the original signatorees, and for translations of this letter, please go to our webpage: http://academicsstand.org/2015/09/asap-writes-open-letter-on-migration/

Academics Stand Against Poverty (ASAP) is an international association focused on helping researchers and teachers enhance their impact on poverty. ASAP’s overarching aims are to contribute to the eradication of severe poverty worldwide and to help ensure that poverty policy and development efforts are guided by rigorous empirical and normative scholarship. ASAP recognises that poverty is a process, not a static given. It seeks to address the root drivers of impoverishment in both the global and domestic spheres and to highlight how some of the factors can worsen poverty in both affluent and less-affluent countries. ASAP’s theory of social change focuses on both institutions and norms. Inspired by how engaged academics helped transform views on civil rights, the US war in Vietnam, apartheid and lately gender inequality and violence, ASAP holds that we can help achieve a decisive shift of views on poverty and poor people worldwide.
Report this as inappropriate
There was an error when submitting your files and/or report.
Inaccurate Inappropriate language Hate speech Illegal Commercial/spam Offensive