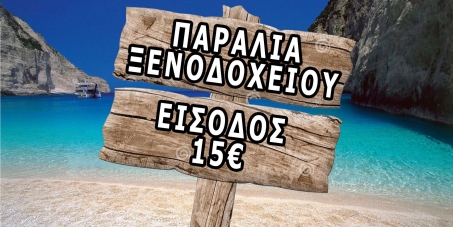 Stop the sell-out of Greek beaches to private companies

By continuing you agree to receive Avaaz emails. Our Privacy Policy will protect your data and explains how it can be used. You can unsubscribe at any time. If you are under 13 years of age in the USA or under 16 in the rest of the world, please get consent from a parent or guardian before proceeding.
This petition has been created by Spyro L. and may not represent the views of the Avaaz community.
x

Incredible victory! After delivering our voices directly to the Finance Ministry, flooding the Environment and Tourism Ministries with thousands of messages and creating a gigantic media storm, the government made a U-turn and shelved the bill. Let’s keep signing to make sure they don’t backtrack! It sounds like a bad joke, but this might be the last summer when we can enjoy freely the famous beaches of Greece! Right now the Greek government is preparing a criminal bill to sell off public beaches to private companies . If the bill passes, Greece will be left with cemented, overdeveloped beaches, and access will only be allowed to those who can pay. But we have a chance to prevent this monstrosity before it's too late.

The Ministers of Finance and Tourism think they can get away with their plan because no one’s paying attention. But momentum is building up fast. The last thing the Greek government wants right before the European elections is a huge, public outcry . If we create a tsunami of descent, we can stop the bill before it reaches parliament and protect the natural beauty of Greece for the next generations.

The bill not only legitimises existing illegal businesses that encroach the country’s beaches but it even allows companies to cover every inch of public beach in Greece with umbrellas and plastic sunbeds and even build on the beaches and cement the seas!

These world famous beaches have survived thousands of years of history and the Greek people have fought hard so that everyone can freely enjoy the natural treasures of this country. Now it’s our turn to join our voices to preserve this word natural heritage for the generations to come . The only power that can stop this crime is us! Sign the petition now and forward it to friends and family. #victory { font-style: italic; font-size: 14px; } $( document ).ready(function() { $("#victory").insertBefore("#for_petition_button_tab h2"); });