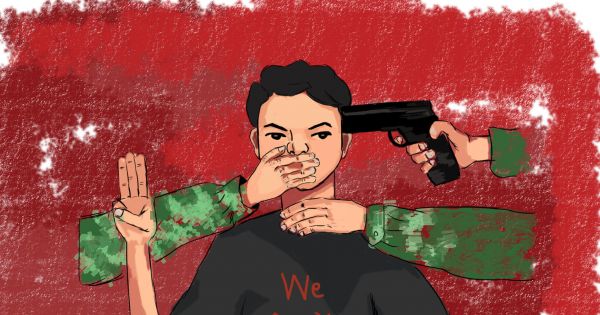 Save Myanmar from another half century of Military Dictatorship!

By continuing you agree to receive Avaaz emails. Our Privacy Policy will protect your data and explains how it can be used. You can unsubscribe at any time. If you are under 13 years of age in the USA or under 16 in the rest of the world, please get consent from a parent or guardian before proceeding.
This petition has been created by Johanna N. and may not represent the views of the Avaaz community.
x

Sign this petition
Johanna N.
started this petition to
All democratically elected governments
To all democratically elected governments :
" We urge you to support the people in Myanmar, who fight for democracy, their elected government and against military dictatorship. We ask you to recognise the Committee Representing the Assembly of the Union (Pyidaungsu Hluttaw) [1] officially as the legitimate body of administration until all members of parliament have been released. We ask you to make clear that your country does not regard the administrative bodies created by the military as legitimate and denounces the coup d'etat of 01.02.2021. "

More information:
The next few days might decide whether the military in Myanmar can consolidate its grip on power or whether this is going to be one of the rare moments in history where peaceful protest topples dictatorship. Let us join forces with the protesters and give them political support from our countries.[2] The overwhelming majority of people in Myanmar does not accept the military and its commander in chief as their legitimate government and are currently fighting to get their elected government back.[3] [4]

The protesters who bang pots and pans against the power of tanks and march peacefully in the streets of Myanmar's cities right now, know what military dictatorship means. They lived under military rule from 1962-2011 - almost 50 years! And some of them have experienced what the military is capable of when confronted with protests. Nobody knows exactly how many people were killed during the brutal crack downs of demonstrations in 1988 and 2007. There have been shots at demonstrators in the current protest, too.  One young woman was shot in the head by police.[5] [6]
We cannot save the protesters when the police and the army decide to shoot at them again. But we can help them in another way. By weakening the military from outside. When our governments officially condemn the coup and refuse to recognise the administrative bodies set up by the military to rule the country it will weaken their capacity to act and their legitimacy.
After the coup and the arrest of the state leaders and many other members of parliament and political leaders and activists, the remaining members of parliament gathered and formed the Committee Representing the Assembly of the Union. This was an act of resistance to show that the action of the military is neither legal nor accepted by politicians.

When our governments honour the courage and determination of these parliamentarians and recognise their Committee instead of the military as rightful government, it will not only send out a powerful message to all those fighting for democracy it will also undermine the authority of the generals.
The international community needs to put a spotlight on the crisis in Myanmar - widespread attention might help to prevent atrocities. To achieve this, we need to be fast! Clear statements by governments around the world against the coup and official recognition of the Committee formed by the remaining parliamentarians will show the generals that they are closely watched from outside the country and that the international community stands with the protesters.

Myanmar and its de-facto leader Daw Aung San Su Kyi have been widely criticised in recent years for violent ethnic cleansing of the Rohingya population in Rakhine state. Now it is the same Daw Aung San Su Kyi that has been detained by the military. However, while Aung San Su Kyi has been criticised mainly for remaining silent in face of ethnic cleansing and for defending Myanmar against the allegation of genocide, it was the military that has been directly involved in the crimes committed in Rakhine state.[7] Even though one might be critical of Aung San Su Kyi as a politician, military dictatorship is not going to solve any of Myanmar's many problems. It will only lead to more people suffering.