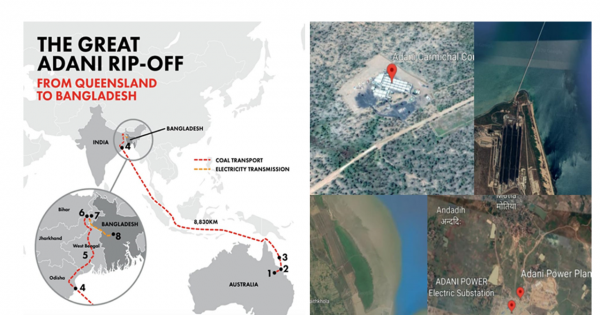 By continuing you agree to receive Avaaz emails. Our Privacy Policy will protect your data and explains how it can be used. You can unsubscribe at any time. If you are under 13 years of age in the USA or under 16 in the rest of the world, please get consent from a parent or guardian before proceeding.
This petition has been created by Bharat G. and may not represent the views of the Avaaz community.
x

Sign this petition
Bharat G.
started this petition to
CM, JHARKHAND; PMs - INDIA, AUSTRALIA and BANGLADESH AND CORPORATES INVOLVED
Why we need your Support!

We Adivasis from Santhal Parganas from Jharkhand, India are being displaced for the world’s most ridiculous power project . Can you imagine - coal will be mined on Aboriginal land in Australia, affect the Great Barrier Reef, cause harm to the Gangetic dolphins and Olive Ridley turtles here in India, take away our lands and livelihoods, and provide expensive, polluting power to Bangladesh. We are being displaced to accomplish this terrible crime against climate and humanity! While the world deals with the COVID-19 pandemic, the Adani Corporation of India is leveraging the government’s concerns about the flagging economy to their own benefit.

Adani’s Godda coal plant in Jharkhand, India will not only be highly polluting for the local environment, it has been pushed through in a completely illegal and undemocratic manner that has violated our Indigenous land rights, circumvented environmental laws, and divided our communities. For Us Adivasi people, our land is sacred and provides us with everything we need to survive. We do not want it destroyed for any such project. But those of us who have refused to give up our land to Adani have had our land fenced off without our consent, had our crops bulldozed, and even been beaten by police and Adani's goons.Adani's coal business, we learn, is murky and one of the world’s most environmentally harmful, with the full support of dirty politics.

Stand with us by signing and sharing our petition. Together we will show our state and national governments that our fight has the support of people around the world!

Hul Johar! We ask that you act faithfully on the election promises of your party and your coalition members and conduct a complete review of the project. The previous public hearing was corrupted by illegal practices and police brutality. The haste with which many of the clearances were granted and most importantly the setting aside of the Santhal Pargana Tenancy Act to promote this project calls for a complete stoppage of the project.

You are fully aware that the circumstances have completely changed since the previous government made this agreement with Bangladesh. We ask you to withdraw this agreement in the light of the commitment to the Paris Agreement and the current pandemic which is already impacting us. With over 40 Gigawatts of stressed power assets for which the banks are bleeding, this investment must come under strict scrutiny.

We ask that you stop pushing this project and Stop the false propaganda among Australian citizens that Australian coal is going to help poor Indians. India has surplus coal and power. Furthermore, Adani’s coal plans are violating indigenous land rights, and destroying water and the local environment in Australia. We support the Wangan and Jagalingou people in Australia, who have said no to Adani's coal mine that would fuel the Godda plant.

We ask you to revoke the Power Purchase Agreement for this coal-based plant. Our countries are already experiencing such grave climate impacts. New coal will accelerate global heating and intensify climate disasters such as fires, drought, flooding and cyclones Renewable energy is already much cheaper and establishing distributed renewable energy projects will provide much needed opportunities to the community without adding debts to your nation.

To the Board of Directors of Power Finance Corporation, Rural Electrification Corporation, SEPCO III and General Electric, and other companies involved

We ask as Power Finance Corporation and the Rural Electrification Corporation that you withdraw the US$1.4billion loan you are providing to Adani for this project. Remember that the nation established your corporations to enable energy access for the poor like us. Instead you are using this is public money for the profit of one person! Currently, surplus power capacity is leading to bankruptcy of power companies,and you should not risk our money on what is not a priority for the people of Jharkhand.
While you may be rationalising that you are only executing somebody’s project, please remember that you will be risking your reputation by providing services to a company which violates our human rights. We seek you to act responsibly on climate change by ceasing your involvement with this project.

Today: Bharat G. is counting on you