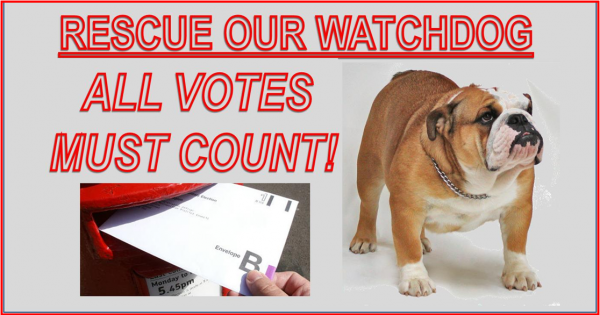 By continuing you agree to receive Avaaz emails. Our Privacy Policy will protect your data and explains how it can be used. You can unsubscribe at any time. If you are under 13 years of age in the USA or under 16 in the rest of the world, please get consent from a parent or guardian before proceeding.
This petition has been created by Kim S. and may not represent the views of the Avaaz community.
x

Sign this petition
Kim S.
started this petition to
Crown Prosecution Service Special Crime Division – Boris Johnson – Electoral Commission
The toothless Electoral Commission remit authorized by this government left the UK electoral system grossly insecure and highly susceptible to corruption with an open invitation to industrial scale vote rigging since it was privatized. Due to this unacceptable lack of scrutiny the integrity of both referendums and recent elections held in the interim cannot be guaranteed, placing the legitimacy of all the results in very serious jeopardy.  Oil & Gas subsidiary Idox have rapidly expanded, absorbing smaller competitors, to monopolize this sector with zero Electoral Commission oversight:
A Watchdog that cannot watch is just a dog!

Unprecedented vote swings are bound to appear highly suspicious following the revelation that the majority of UK vote handling was outsourced to one private company with the Idox Postal Vote Managed Service marred by powerful ties to the Tory Party. Democracy is strengthened by robust challenge: if there was no impropriety then there is no legitimate reason to resist an Electoral Petition.
We demand a comprehensive nationwide investigation into the 2019 election to expose the truth, confirm the validity of the results and rectify the ongoing damage to the integrity of our democracy.

Manipulation of elections presents a growing menace to all free societies, with no safeguards to monitor outsourced vote handling systems and hackable computer files controlled by unaccountable companies drastically increasing that risk.  When the votes of ordinary citizens are rigged or no longer counted, the majority of the electorate are rendered helpless and vulnerable to exploitation by the wealthy elite and powerful corporations. The UK Government has a duty to demonstrate a principled example by decisively eradicating all of the modern day threats to electoral integrity that are steadily delegitimizing the validity of claims to high office by the most influential political leaders worldwide.

Today: Kim S. is counting on you