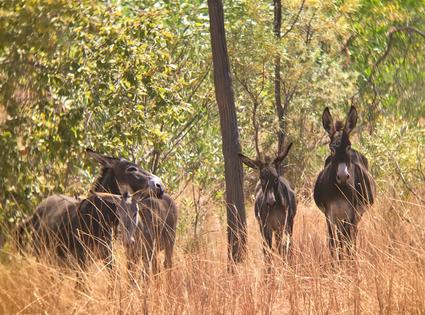 Stop the Killing of Wild Donkeys in Western Australia

By continuing you agree to receive Avaaz emails. Our Privacy Policy will protect your data and explains how it can be used. You can unsubscribe at any time. If you are under 13 years of age in the USA or under 16 in the rest of the world, please get consent from a parent or guardian before proceeding.
This petition has been created by Bio4Climate .. and may not represent the views of the Avaaz community.
x

Sign this petition
Bio4Climate ..
started this petition to
Department of Primary Industries and Regional Development, Western Australia Government
The Western Australian government has nearly wiped out wild donkeys from the Kimberley, a region in northwest Australia. They have already shot half a million donkeys, and now plan to eradicate the rest of the population by ordering the shooting of the last ones living peacefully on Kachana Station, a holistically managed landscape.

The Western Australian Government used horrific mass gunning, which left thousands of donkeys dead and dying across the land. They trapped mares (or “jennies”), fixed them with radio transmitters, and then tracked them. Once a mare returned to her family, helicopters moved in and shot all the other donkeys except for her. Then the helicopters waited until the mare joined another social group and did it all over again. In some cases up to 20,000 donkeys in two weeks were shot.

The Western Australian government’s donkey eradication program mercilessly kills donkeys without consideration for animal welfare or their positive ecosystem function. The government sees these animals as nothing but ‘pests,’ but there is plenty of documentation that proves the donkeys have an important ecological role.

In Kachana Station, wild donkeys have improved the health of the land in the past 20 years. Where the donkeys graze, the soil has improved, plants have returned, and wildfire intensity and frequency have decreased. A major study documented that wild donkeys dig wells, which provide water to many wild animals such as marsupials, birds, and predators, and create nurseries for plants. In Australia’s increasingly volatile, aridified landscape, such benefits are necessary for building a climate-resilient nation.

The Western Australian government is now demanding that Kachana Station shoot and kill wild donkeys in their care, or else face major fines.

To support Kachana Station’s research on the wild donkey’s ecosystem benefits, sign our petition today to urge the Western Australian government to retract its order. Help us stop the killing of wild donkeys in the Kimberley.


Image: Wild donkeys, mares and their foals, on Kachana Station (by Arian Wallach)

This petition is sponsored by Biodiversity for a Livable Climate, a nonprofit organization which highlights nature-based solutions to the climate crisis. Visit us at bio4climate.org.

Today: Bio4Climate .. is counting on you

Bio4Climate .. needs your help with "Stop the Killing of Wild Donkeys in Western Australia". Join Bio4Climate .. and 400 supporters today