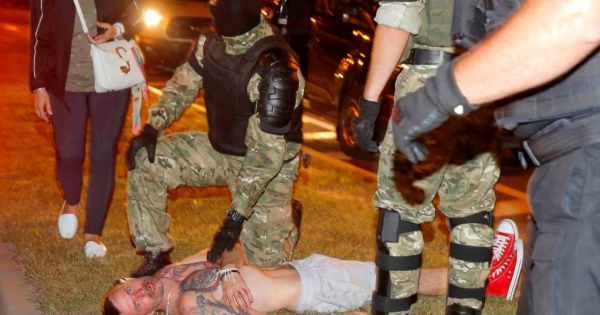 By continuing you agree to receive Avaaz emails. Our Privacy Policy will protect your data and explains how it can be used. You can unsubscribe at any time. If you are under 13 years of age in the USA or under 16 in the rest of the world, please get consent from a parent or guardian before proceeding.
This petition has been created by Max Š. and may not represent the views of the Avaaz community.
x

Sign this petition
Max Š.
started this petition to
European Commission, United Nations, national governments
On August 9th,  Belarus’ dictator Alexander Lukashenko declared himself winner of the country’s presidential elections (for the sixth time in a row). Even with hundreds of activists, bloggers and two of his rival candidates in jail , it was still not an easy task for him. His approval rating among Belarusians has recently fallen to as low as 3 to 10 percent. Yet Lukashenko’s Central Electoral Committee declared that he received an incredible 80 percent of the vote! How did this happen?

This was possible, of course, only because of widespread fraud committed by the state. Every local electoral committee was ordered to steal the victory from  Svetlana Tichanovskaya (who, according to independent exit polls and online counters, actually received about 70 percent of the vote ), replacing ballots cast for her with falsified ballots.

As a result, the same day, August 9th, the Belarusian people took to the streets. In Minsk and every other city and town of the country, massive peaceful protests began. And they have not stopped yet! Even the full force of Lukashenko’s police and military, cannot suppress the uprising!

At least one person has been killed, hundreds have been wounded and many more have been arrested and beaten. With the prisons full, Lukashenko has given an order to convert some prison yards into concentration camps.

Several members of the European Parliament have already signed a declaration condemning Lukashenko’s violence. The declaration reads: “The Belarusian regime has crossed a red line by employing unprecedented violence and restrictive measures against Belarusian citizens demanding freedom and democratic changes. We condemn the crackdown and brutal arrests of thousands of Belarusian people, among which are activists, human rights defenders, political opponents and their team members, independent media representatives and bloggers, during the course of the Presidential election campaign as limiting their right to peaceful assembly and association. The level of violence against protesters in the night after the announcement of the alleged election results was of previously unseen scale and cannot be justified and repeated.”

Dear friends! Let’s exert pressure on our respective governments all over the world NOT to recognize Lukashenko as president of Belarus !

His bloody regime has to end! Belarusians can’t bear it any longer!

Today: Max Š. is counting on you