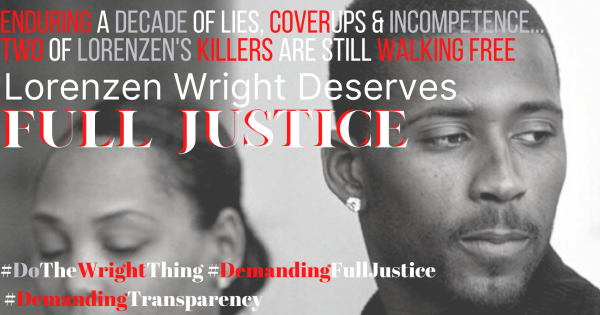 By continuing you agree to receive Avaaz emails. Our Privacy Policy will protect your data and explains how it can be used. You can unsubscribe at any time. If you are under 13 years of age in the USA or under 16 in the rest of the world, please get consent from a parent or guardian before proceeding.
This petition has been created by JProject M. and may not represent the views of the Avaaz community.
x

Sign this petition
JProject M.
started this petition to
Governor Bill Lee
#DoTheWrightThing - Sign & Share this petition today.
Lorenzen Wright, Memphis' Most Beloved Son & NBA Star, was brutally murdered in July 2010. While his ex-wife Sherra Wright Robinson was the Mastermind behind his death, two shooters still remain free.
That is NOT Full Justice.

In 2011, Psychic Channel Abigail Noel presented Memphis Law Enforcement with 100% accurate details on this case - the who, why & where were all answered. Law Enforcement failed to act on this information & the case remained cold for almost 8 years until Sherra Wright & Billy Ray Turner were finally arrested in December 2017.
Guilty parties like Lorenzen's supposed friend, Kenny Brown, are being protected by the FBI as informants. Investigators know that Kenny Brown intentionally drove Lorenzen to his death that night & was paid $100,000 to do so. Meanwhile, Greg Lewis, known to be the primary gunman and under investigation by the FBI for his involvement in a local drug cartel, has yet to be apprehended.
That is NOT Full Justice.

"I met Abigail after the murder of my brother, Lorenzen Wright. No one has been more dedicated or worked harder to fight for his justice than Abigail. She has never wavered even though it took nine years to find out that she was 100 percent right all along. If Law Enforcement had listened to her, we would have had justice in 2011. Instead, we still do not have full justice today. I want to see all guilty parties charged for my brother's murder and because I know that Abigail won't quit, I know we will get justice."   Savia Archie, Lorenzen Wright's Sister.