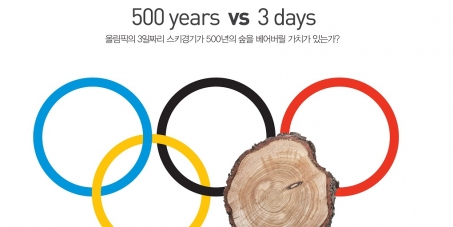 By continuing you agree to receive Avaaz emails. Our Privacy Policy will protect your data and explains how it can be used. You can unsubscribe at any time. If you are under 13 years of age in the USA or under 16 in the rest of the world, please get consent from a parent or guardian before proceeding.
This petition has been created by 지선 고. and may not represent the views of the Avaaz community.
x

Sign this petition
지선 고.
started this petition to
The IOC officials, 국제올림픽위원회
In South Korea, a forest more than 500 years old is being destroyed because of alpine ski competitions in the 2018 Pyeongchang Winter Olympics, which will last only three days. Mt. Gariwang, in which the 500-year-old forest is located, is a home for diverse ecosystems, and also famous for colonies of rare trees of all age classes that can be only found in Korea. The animals and plants listed as threatened by the IUCN (the International Union for Conservation of Nature) as well as the species that are endangered in other regions because of climate change have found a refuge in this mountain. Thus, the treasury of nature has been protected as an ecological reserve for hundreds of years.

However, the Korean government has decided to remove a ban on development in this nature conservation area and started taking down the trees, with the connivance of the IOC. Now the forest’s dense vegetation along with a wide variety of animals living in it are being mercilessly killed with chainsaws. It is no exaggeration to call what is happening here a massacre of nature.

The Korean government insists on the construction of a new ski slope on the ground that the international standards require slopes with an altitude difference of more than 800 meters. However, the rules of the International Ski Federation (known by its French acronym FIS) specifies “2 Run” as an alternative: contestants perform twice at a slope with an altitude difference of 350~450 meters, and the final ranking is decided based on the sum of the two scores. If the 2 Run provision is applied in the Pyeongchang Winter Olympics, the existing ski slopes in Gangwon province will serve perfectly for the competitions. Also the FIS has an exceptional provision that allows competitions in a slope of 750-meter altitude difference. Thanks to this exceptional clause, making some alteration to the existing ski slopes will be just enough to get ready for the games, and we need to be reminded that it was also applied in the 1998 Nagano Winter Olympics. By the alternatives above we can save Mt. Gariwang and prevent wasting the national budget, fulfilling the Olympic spirit.

If a forest suffers damage, humans likewise are bound to be affected. If nature is destroyed, humans will be destroyed too. Once the primeval forest gets wiped out, it will be impossible to restore the lost nature as it is now, even if we try to make up for it by planting more trees. Besides, it is of great concern that the promised environmental restoration is not being carried out when the ancient trees are incessantly cut down.

There is not much time left. We must take action right now, or all the trees will be removed and we will be left with a dismal scene of countless tree trunks. The forest in Mt. Gariwang is a natural treasure for everyone in the world, not just for Koreans. We ask the IOC to immediately stop the construction of a ski slope in Mt. Gariwang, which goes against the spirit of the Olympics.

Today: 지선 고. is counting on you

지선 고. needs your help with "500-year-old Forest Must Not Be Destroyed for 3-day Ski Competitions in Winter Olympics ". Join 지선 고. and 4,535 supporters today