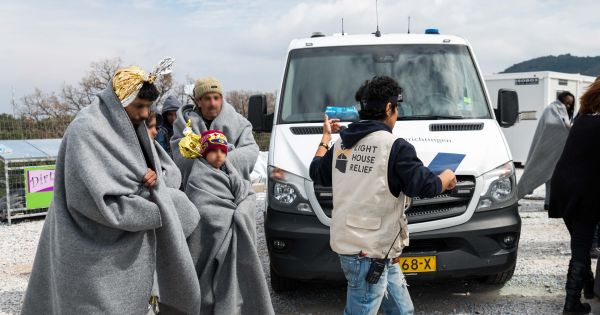 An Urgent Call to Action from Lesvos: Save the Last Transit Camp on Lesvos

By continuing you agree to receive Avaaz emails. Our Privacy Policy will protect your data and explains how it can be used. You can unsubscribe at any time. If you are under 13 years of age in the USA or under 16 in the rest of the world, please get consent from a parent or guardian before proceeding.
This petition has been created by Lighthouse R. and may not represent the views of the Avaaz community.
x

Sign this petition
Lighthouse R.
started this petition to
Hellenic Ministry of Public Order and Citizen Protection & Ministry of Migration Policy
Stage 2 Transit Camp in Skala Sikamineas is at risk of closure on 31st January. With 2019 arrival numbers the highest in three years, this closure would leave large numbers of new arrivals at risk of excessive suffering. Join us now by signing the appeal.

Stage 2 Transit Camp, the UNHCR transit facility located on the north shore of Lesvos, temporarily hosts asylum seekers as they arrive, ensuring that they can access safety, vital medical aid, shelter and rest after the dangerous crossing from Turkey.

On November 19, 2019, the West Lesvos Municipal Council voted in favor of the closure of Stage 2 Transit Camp. This week, we received the alarming news that the decision has not been appealed, meaning that the facility is set to close on January 31, 2020 unless the Hellenic Ministry of Public Order and Citizen Protection, or the Ministry of Migration Policy reverse this decision by January 22nd.

The north shore receives over half of the total arrivals to Lesvos. This year alone, 15,000 people were hosted at the camp, half of whom were children. In December, Stage 2 welcomed people every night for two weeks straight - housing up to 286 people in one night. With the closure of Stage 2, people arriving will be left waiting for hours on beaches, by the side of the road, or in remote rocky areas, sometimes in sub-zero temperatures, with no access to immediate shelter, protection or medical aid. They may even attempt to walk for hours to the south, in scenes reminiscent of 2015.

As humanitarian actors on the north shore of Lesvos, we are extremely concerned by the repercussions of this decision, which does not take into consideration the consequences for people arriving and the impact it will have on local communities. The closure would be nothing short of devastating for both, but the greatest suffering would placed on people landing on the north shore.

We urge the Ministry of Migration Policy and the Ministry of Public Order and Citizen Protection to keep Stage 2 Transit Camp open and to ensure that people fleeing conflict and persecution can reach a safe place upon arrival.

Today: Lighthouse R. is counting on you

Lighthouse R. needs your help with "An Urgent Call to Action from Lesvos: Save the Last Transit Camp on Lesvos". Join Lighthouse R. and 7,786 supporters today