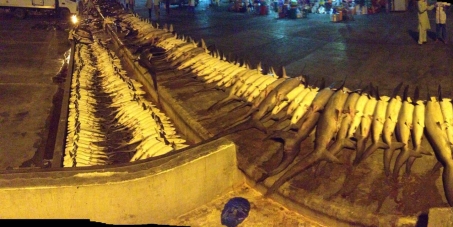 To his Highness Minister of environment and water of the United Arab Emirates: regulate the commerce of shark and rays.

By continuing you agree to receive Avaaz emails. Our Privacy Policy will protect your data and explains how it can be used. You can unsubscribe at any time. If you are under 13 years of age in the USA or under 16 in the rest of the world, please get consent from a parent or guardian before proceeding.
This petition has been created by Bam B. and may not represent the views of the Avaaz community.
x

Sign this petition
Bam B.
started this petition to
minister of environment and water of the United Arab Emirates

To his Excellency the Minister of Environment and Water and other renowned decision makers.

In the charitable spirit of this holy month of Ramadan we request the ministry to take notice and action of the following.

We can be proud with all that has been done so far with regards to fishery regulations here in the United Arab Emirates.

It is currently estimated that on a global scale up to 80 million sharks are killed each year as a result of either direct targeting for their fins or as a result of bycatch when targeting other species. This amount is unsustainable and some shark populations are now thought to have declined by as much as 98% in the last 20 years alone. We are facing a future where many species are on the brink of collapse, all because of an increasing demand for shark fin soup in the far east.

We firmly believe that the UAE is in a prime position to take a stand against the trade in shark fins and related products. It is estimated that currently the UAE is the fifth largest exporter of shark fins to Hong Kong. Although much has been done by the UAE with regards to regulating the catching of sharks within UAE waters, more must be done with regards to the trade and export of shark fins where the UAE acts as an export hub for the surrounding countries.

By regulating the sale or trade of sharks and rays here in the UAE, we can make a big step towards their conservation.

This will be of benefit to shark and rays conservation but will also make the UAE a world leader in shark conservation and an example for the world to follow.

Already several airlines have declared they will no longer transport shark fins (Emirates, Etihad). Similarly, Brunei has introduced and is enforcing a ban on the landing, trade and importation of shark fin. Maldives has recently enforced a similar memorandum on the trading of rays and their related products.

CITES, the Convention on International trade of Endangered Species recently listed more shark species as vulnerable, endangered or threatened. In particular are the Hammerhead species that were recently listed as CITES category II but unfortunately are seen regularly in Deira fish market.

We recognise that there may be a demand in the domestic market for shark products and that the local shark population can be managed through the use of a properly regulated artisanal shark fishery. However the mass import and export of shark products to the Far East is unsustainable and should be controlled.

We respectfully request that the Ministry of Environment and Water considers and proposes new legislation regulating the sale and trade of sharks and rays products and makes the UAE a shark and rays controlled and regulated trading zone.

Today: Bam B. is counting on you

Bam B. needs your help with "To his Highness Minister of environment and water of the United Arab Emirates: regulate the commerce of shark and rays.". Join Bam B. and 2,922 supporters today