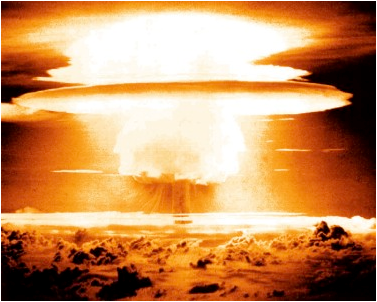 No Nuclear War over Ukraine

By continuing you agree to receive Avaaz emails. Our Privacy Policy will protect your data and explains how it can be used. You can unsubscribe at any time. If you are under 13 years of age in the USA or under 16 in the rest of the world, please get consent from a parent or guardian before proceeding.
This petition has been created by Charles J. and may not represent the views of the Avaaz community.
x

Sign this petition
Charles J.
started this petition to
NATO and the Russian Federation
The war in Ukraine is causing death, destruction, unfolding chaos and a wave of desperate refugees. The danger is all the greater because of Ukraine's 15 nuclear power reactors which are attempting to operate safely in a war zone. A meltdown at any one of them could cause a disastrous release of radiation.

Even more worrisome, nuclear saber rattling on both sides raises the specter of the fighting escalating to the use of nuclear weapons. On Thursday Russian President warned anyone "who stands in our way...they must know that Russia will respond immediately, and the consequences will be such as you have never seen in your entire history."

To which, the French Foreign Minister Le Drian responded, "Putin should understand that NATO also has nuclear weapons."

A single nuclear weapon detonated over any of the great cities of Europe would kill hundreds of thousands of people. A nuclear war between NATO and Russia would kill tens of millions outright and could trigger enough climate disruption to cause a global famine.

This madness has to stop.

We citizens of the world call for NATO and the Russian Federation to renounce the use of nuclear weapons in this conflict and we call for an immediate cease fire and the withdrawal of all Russian military forces.

Today: Charles J. is counting on you