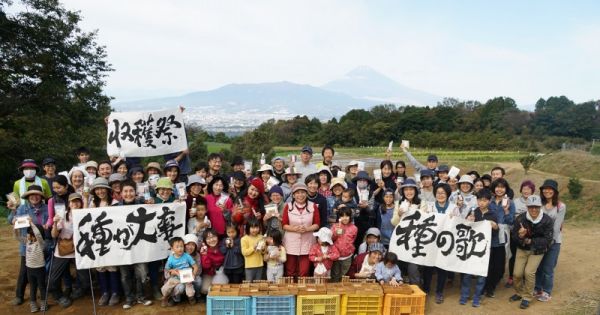 By continuing you agree to receive Avaaz emails. Our Privacy Policy will protect your data and explains how it can be used. You can unsubscribe at any time. If you are under 13 years of age in the USA or under 16 in the rest of the world, please get consent from a parent or guardian before proceeding.
This petition has been created by 都築 明. and may not represent the views of the Avaaz community.
x

Sign this petition
都築 明.
started this petition to
Nippon TOYOUKE Natural Farming
Urgent! The ruling party of the Japanese government and the Ministry of Agriculture, Forestry and Fisheries are trying to enforce the revision of Plant Variety Protection and Seed Act at extraordinary Diet by 5 December 2020.

They explained the purpose as "In recent years, excellent Japanese varieties have been leaked overseas, production has been increased in other countries, and they are exported to third countries.
It is an amendment to protect the rights of developers. "

However, it seems that this is an ostensibly reason and the original purpose is different.

The original purpose is to amend the law to expand the seed business of giant agricultural conglomerates such as Bayer (Monsanto), DuPont and Syngenta.

If we really want to protect the rights of domestic seeds and their developers, we should be able to do so without amending the Plant Variety Protection and Seed Act.

It is predicted that the revision of the Plant Variety Protection and Seed Act will cause great damage to Japanese farmers.

Under this revised Law, it becomes possible to qualify as an infringement simply by presuming that the characteristics are similar to those of the registered varieties in the "Characteristics Table".

For example, even if it is a native variety, if it is found to be similar to a registered variety in the characteristics table, the Japanese farmer who "seeded" is found to have infringed the rights of the breeding right holder and have to pay a fine.

According to this revised Law, self-propagation is prohibited only for "registered varieties", and although it is said that most of the current producers are general varieties, it is becoming clear that it was false representation.

With regard to rice, the Ministry of Agriculture and Forestry had been explaining on their homepages, prefectures, JA (Japan Agricultural Cooperative), etc that the registered varieties are only 16%, so there would be no significant effect. However, it was false.

As an example, it was explained that Koshihikari in Niigata Prefecture was okay as it is general varieties, but in fact 99% was found to be a registered variety called Koshihikari BL with improved varieties to prevent blast disease. When it is calculated again, it was found that the number of registered varieties was 40% in the field of rice, that is two and half times more than what the government explained!

Today, many farmers do home seed-raising to control the cost of purchasing seeds and seedlings. In addition, most of the farmers who run natural farms and organic farms that do not use pesticides or chemical fertilizers like us, Nippon TOYOUKE Natural Farming takes home seed-raising.

Therefore, it cannot be said that this revised law is from the standpoint of a farmer, and it is predicted that it will lead to a deterioration in terms of protecting the seeds of the people.

If this is the case, home seed-raising will become a very high hurdle for farmers and will severely put pressure on their management.

The bottom line is that farmers have to buy seeds at the asking price of a giant agricultural conglomerate.

Laws that are supposed to protect the varieties of their own country will eventually hinder farmers.

If farmers go out of business due to financial difficulties, Japan's already low food self-sufficiency rate will decline further, and eventually it will be exiled.

To make matters worse, the oligopoly of seed makers by giant agricultural conglomerates has progressed, and we Japanese citizens must eat "genetically modified" and "gene-edited" crops whose scientific safety has not yet been confirmed. We will be forced into a situation where we cannot live.

Therefore, the bill must be blocked at all costs.

We were doing paper signing activities in Japan, but we would like to get the support from overseas as well, so we have decided to carry out a campaign at AVAAZ.