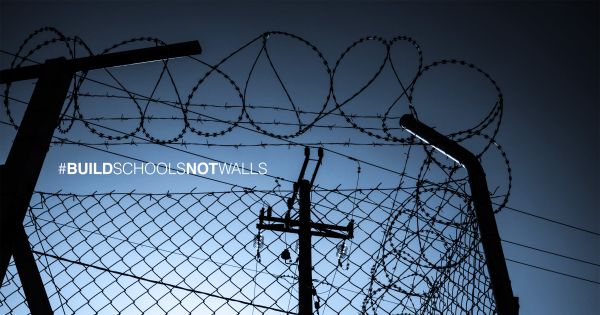 By continuing you agree to receive Avaaz emails. Our Privacy Policy will protect your data and explains how it can be used. You can unsubscribe at any time. If you are under 13 years of age in the USA or under 16 in the rest of the world, please get consent from a parent or guardian before proceeding.
This petition has been created by Karol W. and may not represent the views of the Avaaz community.
x

Sign this petition
Karol W.
started this petition to
Notis Mitarachi, the Minister of Migration of Greece
We strongly stand against allocating European funds to build walls around Greek refugee camps.

Greece, with the full support of the European Union, is turning refugee camps into de-facto prisons.

Millions of euros allocated for building walls should be spent on education, psychological support and the improvement of hygienic conditions in the refugee camps.

In January and February 2021, the International Organization for Migration (IOM) published two invitations to bid for the construction of fences in refugee camps in mainland Greece.

However, the fences became concrete walls. In March the Greek Ministry of Migration and Asylum commissioned to build NATO type fences and introduce additional security measures.

Nobody - including camp residents - was informed about it.

The walls are a jeopardy for integration, safety and mental health

Residents of refugee camps fled their country in search for safety. In Europe their (mental) health is worsening because of the horrific conditions in the camps.

Building the walls after a year of strict lockdown will lead to a further deterioration in their mental state.

Moreover, it will:
- deepen divisions between people: it will make the interaction between refugees and the local community even more difficult, if not impossible.
- make it even harder for journalists and NGO’s to monitor the situation in the camp
- put the residents of the camps in danger in case of fire.

As EU citizens we cannot allow that innocent people are being locked behind the walls, in the middle of nowhere. Being a refugee is not a crime.

Seeking asylum is a human right.

Democracy and freedom cannot be built with concrete walls.

Building walls was always the beginning of dark periods in history.

Crushing walls - is the source of hope, reconciliation and (what is a foundation of European idea) solidarity.

No more walls in the EU!

Today: Karol W. is counting on you