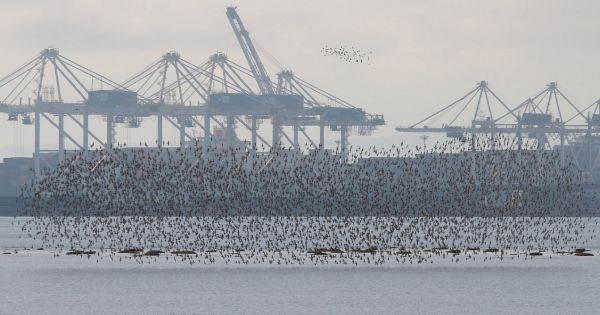 By continuing you agree to receive Avaaz emails. Our Privacy Policy will protect your data and explains how it can be used. You can unsubscribe at any time. If you are under 13 years of age in the USA or under 16 in the rest of the world, please get consent from a parent or guardian before proceeding.
This petition has been created by Gillian A. and may not represent the views of the Avaaz community.
x

Sign this petition
Gillian A.
started this petition to
PM Trudeau, Federal Env. Minister Wilkinson, BC Premier Horgan, BC Env. Minister Heyman
The Vancouver Port Authority has applied to expand its container port operation by building a 180 hectare artificial island in the Fraser River estuary in British Columbia. Designated as a Wetland of International Importance (RAMSAR site) and a Site of Hemispheric Importance in the Western Hemispheric Shorebird Reserve Network, the estuary is the only Canadian feeding area for millions of birds migrating on the Pacific Flyway.

Over 80% of these wetlands have already been destroyed. RBT2 is the latest in an assault of approved or proposed projects in the estuary, including the existing container terminal, a coal port, new jet fuel terminal and storage tanks, expanded LNG terminal and cement plant, fourth airport runway and the nearby Trans Mountain crude oil pipeline expansion. Birdlife International has listed the Fraser Estuary as an Important Bird Area (IBA) in danger.

RBT2 would be built in the heart of supposedly protected critical habitat for the world’s entire population of 73 remaining Southern Resident Killer Whales. Five whales have died since 2016, mostly from starvation, due to huge declines in their main food, Chinook salmon, as well as big increases in marine toxins, ship traffic and underwater noise. Department of Fisheries & Oceans scientists warn RBT2 may jeopardize the survival of these whales.

Twelve of the 13 Chinook runs in the Fraser River are at risk (with 7 endangered). RBT2’s artificial island will change currents, temperature and salinity in the estuary, sweeping young salmon away from sheltering marshes into deeper, predator-filled waters.  Department of Fisheries and Oceans scientists warn RBT2 “will significantly alter the existing Roberts Bank ecosystem resulting in...changes to water circulation and sediment transport processes... the large-scale destruction of fish habitat...loss and permanent alteration of large areas of Fraser River estuary habitat... Fraser River Chinook Salmon are very dependent on the estuary for a critical juvenile growth period before entering the ocean.”[1]

These biological changes combined with causeway expansion will also destroy the crucial biofilm found in the area’s mudflats. Most of the world’s entire population of migrating Western Sandpipers stop to fuel up on this biofilm and Environment Canada scientists have warned that the impacts of RBT2 to Western Sandpipers will be “potentially high in magnitude, permanent, irreversible, and continuous.”[2]

The Port claims it can mitigate the damage by destroying and ‘rebuilding’ other protected habitats but Environment Canada scientists wrote, “... predicted Project-induced changes to Roberts Bank constitute an unmitigable species-level risk to Western Sandpipers, and shorebirds more generally.”[3]

The Port says it needs to expand, but with five other Canadian west coast sites already available to handle any future increases with minimum environmental damage, the need for RBT2 has been dismissed by global trade experts.

This petition is sponsored by the Boundary Bay Conservation Committee, Fraser Voices Association, Against Port Expansion (APE), the B.C. Great Blue Heron Society and the Council of Canadians (Delta-Richmond chapter).

Today: Gillian A. is counting on you

Gillian A. needs your help with "Refuse Roberts Bank Terminal 2 (RBT2) and save the Fraser River Estuary!". Join Gillian A. and 795 supporters today