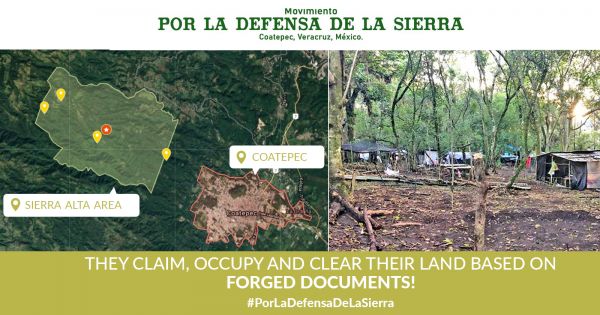 By continuing you agree to receive Avaaz emails. Our Privacy Policy will protect your data and explains how it can be used. You can unsubscribe at any time. If you are under 13 years of age in the USA or under 16 in the rest of the world, please get consent from a parent or guardian before proceeding.
This petition has been created by Ana M. and may not represent the views of the Avaaz community.
x

Sign this petition
Ana M.
started this petition to
Señor Presidente Andrés Manuel López Obrador
Dear fellow AVAAZers, as you read this, local coffee-farmers in Veracruz find themselves and their rich and unique environment under serious threat by forged land claims, almost unnoticed by the rest of the world. Please help to spread the word and sign the petition!

[UPDATE]
While the media report that the measurement has been suspended (https://www.milenio.com/estados/sedatu-suspende-deslinde-predio-sierra-alta-coatepec-veracruz), just now a letter appeared on the doors of SEDATU, explaining that the land is considered as "national territory". In what they now call "administrative procedure", people claiming to own this land are given a deadline of just a few days to proof ownership. The 500 legal owners are farmers, most of them never get close to the SEDATU's residency, many of them illiterate and intimidated, are in no state to defend their case in such a short period. They need all of our help right now!
--
Hashtag: #PorLaDefensaDeLaSierra
Like the Facebook page: https://www.facebook.com/Por-la-Defensa-de-la-Sierra-Coatepec-Ver-10351929477565

Background:
The so-called “campesino” organization, CIOAC [1], despite acting in some cases as Zapatistas to gain trust of the poor rural communities, has previously attacked an autonomous center named “La Realidad” in Chiapas and murdered Zapatista Galeano and is still repressing and threatening people in various regions of Mexico [2]. Right now, the same organization is illegally invading territory in the municipality of Coatepec, Veracruz, near the capital Xalapa [3].

The area features a vast cloud forest, its ecosystem is unique in Mexico and home to many rare species of flora and fauna [4]. It is a coffee-growing area, the forests provide ideal shade for its cultivation. The small scale farmers practice gentle, sustainable agriculture, living in harmony with nature. The area also provides most of the region's drinking water: 40% of the total supply for the capital Xalapa, as well as 100% of the supply for the smaller town of Coatepec, comes from those mountains [5].

The CIOAC occupied the lands of the rural population. They set up their camps, intimidated the people and continue to threaten the surrounding communities [6]. People have already been displaced from their own, legally owned lands. In 2019, the SEDATU (Secretariat of Agrarian, Land, and Urban Development) agreed to review a forged ownership claim of 2000 hectares of land of a certain Sr. Francisco Ruiz, which locals report, he intends to donate to the forces of the CIOAC [7].

In February 2020, SEDATU issued an appeal through local newspapers that landowners should contact the SEDATU within 30 days [8]. Due to pandemic-related measures including an essential businesses only lockdown, no information about this appeal reached landowners. Meanwhile, the SEDATU recognized a document allowing for the measurement of the land. This document has now been declared a forgery by the community agent who supposedly signed it [9].

Drinking water, a natural resource available in abundance on that specific part of land, is a profitable target for multinationals. Local communities, now in the process of organizing a more structured resistance, are severely worried. Past events show that such incidents are a clear indication of corruption and illegal land sales: an hour's drive from Coatepec, in Jalcomulco, a hydroelectric power plant project was launched in 2010 by Odebrecht Group. As a result, the population continues to be terrorized in a similar way to this day. [10]

With this history in mind, the inhabitants and farmers of the cloud forests have valid reasons to fear kidnapping, torture and murder when defending their ground. They urgently need the protection of a transparent government that respects and upholds the rule of law.

President Andrés Manuel López Obrador founded his political party MORENA [11] in 2011 with the aim of fighting poverty and corruption in the country. His election was based on the desperate hope of a Mexico free of corruption. Preventing the land grab, invasion and destruction of valuable ecosystems would be a true achievement for his presidency and a unique opportunity to demonstrate that he is serious about his objective.

Let us show Mr. López Obrador that a worldwide community of people is aware of the troubles his country is facing and that we are supporting him in this fight for justice. Let the CIOAC and the Mexican government know that their corrupt actions won’t go unnoticed!