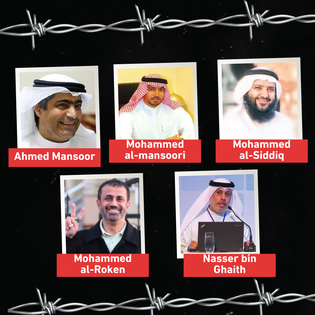 By continuing you agree to receive Avaaz emails. Our Privacy Policy will protect your data and explains how it can be used. You can unsubscribe at any time. If you are under 13 years of age in the USA or under 16 in the rest of the world, please get consent from a parent or guardian before proceeding.
This petition has been created by ICFUAE M. and may not represent the views of the Avaaz community.
x

Sign this petition
ICFUAE M.
started this petition to
UAE AUTHORITIES
As the Dubai Expo launches on 1 October 2021 in the United Arab Emirates (UAE) under the motto “Connecting Minds and Creating the Future through sustainability, mobility and opportunity”, we the undersigned join over 80 NGOs calling on the Emirati authorities to demonstrate their commitment to these values by releasing all imprisoned human rights defenders and activists.

Pending their release, we call on the UAE to comply with international standards for prisoners, including by allowing regular family visits to the detainees, access to healthcare and regular consultations with their lawyers. We ask for them to be given basic amenities such as a bed, blankets in winter and air conditioning in summer, and for prisoners to be allowed outside their cells to have contact with other inmates in the canteen or the yard, conditions which are notoriously denied to jailed activists.

Among hundreds of prisoners of conscience, the following five individuals are serving grossly unjust 10-year sentences in high-security prisons in Abu Dhabi, where they face torture, inhumane detention conditions and arbitrary disciplinary measures, such as solitary confinement and intrusive body searches. They are solely imprisoned for their peaceful and legitimate human rights work in violation of their right to freedom of expression.


With the spotlight on the UAE during the Dubai Expo, we urge the Emirati authorities to take this opportunity to prove to the international community a true commitment to human rights by addressing the aforementioned human rights abuses, including by releasing all jailed human rights defenders and activists.