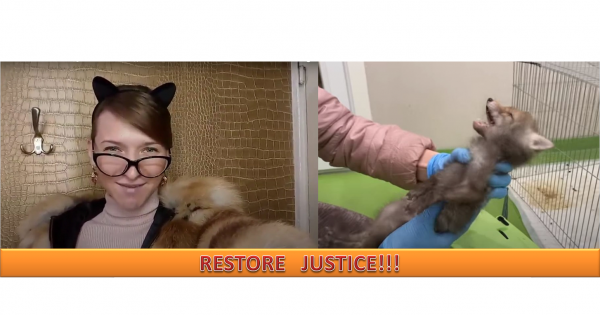 The wild fox from Athena-TV is NOT a toy — send him to an animal rehabilitation center!

By continuing you agree to receive Avaaz emails. Our Privacy Policy will protect your data and explains how it can be used. You can unsubscribe at any time. If you are under 13 years of age in the USA or under 16 in the rest of the world, please get consent from a parent or guardian before proceeding.
This petition has been created by Michael M. and may not represent the views of the Avaaz community.
x

Sign this petition
Michael M.
started this petition to
State Environmental Inspectorate of Ukraine and Verkhovna Rada (parliament) of Ukraine
In April, the Prischepa family, despite the “season of silence” - an environmental campaign introduced for legislative implementation in Ukraine (Article 39 of the Law of Ukraine “On the Animal World”), came across a wild fox and took it home. The videos about saving the cub, released on the «Athena-TV, Cat's Paradise» (in rus.) YouTube channel, have gathered millions of views. Additionally, the story of the fox, that was quickly declared "orphaned", gave rise to many questions from attentive followers and animal rights activists.

Since the release date of the first video on April 17 of this year (that is, several weeks already), the fox cub does not receive proper care and is systematically exposed to stress. Most of the time he spends in a small cage without a tray, when taken on walks - he is restricted by a short harness. Instead of receiving food suitable for foxes, the cub is fed with dog food, which can lead to serious health issues. During filming, the fox is continuously forced to stay in frame, grabbed roughly by the throat and turned over after eating.

Julia (ukr. — Yulia) Prischepa, who has no experience in caring for foxes at home, refuses to follow the advice and recommendations she receives from experienced fox breeders and employees of wildlife rehabilitation centres. Moreover, Julia Prischepa claimed in one of the videos on YouTube, that the animal would not be sent to a rehabilitation center; instead, their family has decided to keep him as a pet. This is a VIOLATION of Ukrainian legislation.


Until recently, Julia Prischepa used to run a cattery of Scottish breed cats "Athena". Over time, the nursery developed a bad reputation among professional breeders and was closed down. Julia and her husband, apparently to disguise their real intentions, devoted themselves to helping homeless animals. However, a detailed analysis of their «Athena-TV, Cat Paradise» (in rus.), «Rescue Animals», and «Sweety Kitty» channels demonstrate, that their animal rescue is staged. The same puppies and kittens appear in different stories. These animals are often intentionally put at risk: clutched between tractor wheels, squeezed into narrow slots or pipes, entangled in nets. Their suffering and pain, captured on camera, is used in a manipulative way to evoke an emotional response from audience, and NOT to promote a truly humane attitude to animals. After their appearance in one or more videos, these supposedly saved animals disappear into the unknown, with no reliable information available about their fate.

Currently, the delivery of wild animal rights protection, consolidated in the legislation of Ukraine, leaves much to be desired. The little fox cub has become a hostage of this situation, and the situation itself needs to be broadcasted.

We, Maria Rusanova (citizen of Sweden) and Ksenia Sysoliatina (citizen of Ukraine), as well as a group of worried citizens from around the world, demand the following actions from the State Environmental Inspectorate of Ukraine (https://dei.gov.ua/) and the Verkhovna Rada (parliament) Committee on issues of environmental policy and environmental management:

1. Initiate an inspection to establish, whether the activities of Yulia Prischepa are in compliance with Ukrainian legislation and animal rights, regarding not only the fox, but her dogs and cats as well.

2. Transfer the fox cub to a rehabilitation centre for wild animals, where he will receive all the necessary assistance and his future fate will be decided by zoologists along with other experts.

In addition to international support, many Ukrainian animal rights activists support our initiative. In particular, «VO Zoopatrol» (founder Julia Trusanova) and the Internet channel «First Ukrainian Animal Rights Channel» (activist Michael Marchenko) are liaising with the state authorities of Ukraine in order to address the problem.

SUPPORT THE JOINT EFFORTS OF ANIMAL RIGHTS DEFENDERS OF DIFFERENT COUNTRIES - SIGN THIS PETITION TO BE REMITTED TO UKRAINIAN OFFICERS AND POLITICIANS. YOUR VOICE MATTERS!